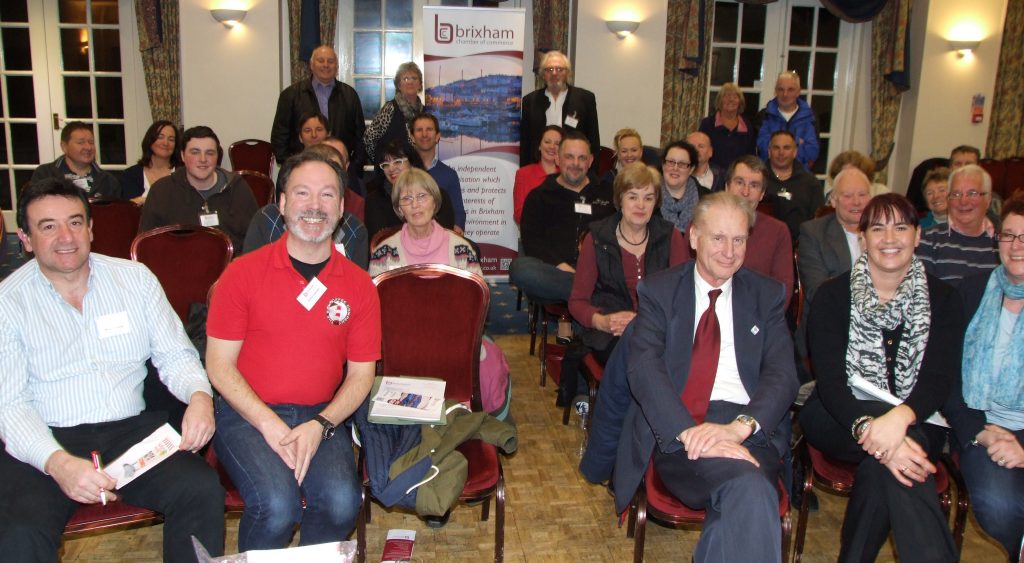 There was a real buzz at the recent Brixham Chamber of Commerce AGM, where over 50 people heard how the Chamber has grown and developed during 2013.

The successes of 2013 have included the Chamber driving forward new branding, new website, window stickers, leaflets and banners.  This has helped to increase awareness of the voluntary organization and, more importantly, helped to increase membership by over 30%.

Behind the scenes, the Chamber campaigns tirelessly on key issues such as parking/logistics, business rates, road closures, Tesco and tourism – as well as managing both the Saturday and Sunday markets.

On top of that, the Chamber has donated thousands of pounds to local charities including £1000 to Pride in Brixham, £500 to the Lantern parade and £2000 towards the Park and Ride facility and active support for the many fantastic festivals in Brixham.

Jonathan Bye of Eric Lloyd Estate Agency, summed up the feel good factor in the room; “Having been a lapsed member of the Chamber, I will definitely be renewing my membership.  I would like to congratulate everyone in the Chamber for all their hard work.  It has been such a positive and interesting meeting.”

Mayor Gordon Oliver gave an update on the local economy, budget cuts and the Dawlish rail issues impacting on tourism in the area. The Plymouth City Deal, a jointly submitted bid, will have a positive effect for Brixham by providing potential funding sources, especially in the marine sector.

He congratulated Brixham Chamber and the work undertaken by its Executive committee, and said how impressed he was about the tremendous achievements made by a purely voluntary, self-funded body.

Debbie Smith, co-ordinator of Brixham Seaworks, also gave a brief update of the new business workspace situated above in the Town Hall.  The space provides ad-hoc office facilities for small and home based businesses as well as meeting rooms and 3 permanent office spaces.

The general feeling afterwards was that the meeting was extremely positive with the chamber working together well on many fronts to meet the challenges of all businesses in the town.

Finally Marie Waters from Child Friendly Matters said; “ I thought this would be a really low key event, but it has been fantastic – such a great community atmosphere.  Although I work in Brixham already, now it has made me want to live in Brixham!”

The election of officers for 2104 was also held. Minutes of the meeting are available to members here.