AGM and Executive Committee for 2018 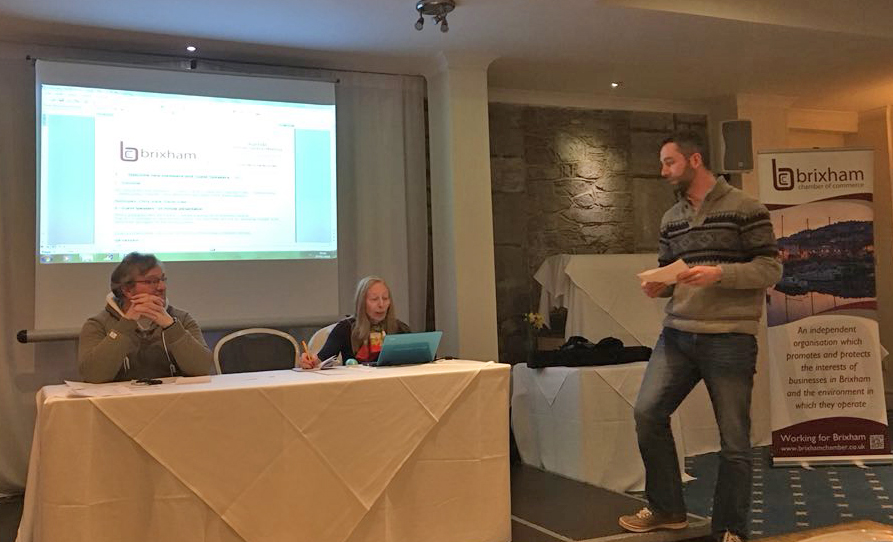 With the snow continuing to fall outside and the wind rattling the windows, members who braved the elements to attend the AGM on the 27th February heard Chairman Martyn Green present his overview of 2017 and roundly thank the executive and membership for their input and support during the year. The full version of the Chair and Executive report can be downloaded here. On behalf of the Chamber, Alex Foley returned the compliment thanking Martyn for his selflessness and the countless hours he has devoted to the Chamber and to issues that are important to local businesses and the Brixham community as a whole.

Former Chairwoman Jacqui Shaw, who is also a director of Devon Chamber, reminded the group that we can all be justifiably proud of Brixham Chamber and it’s many achievements. We are often cited as an example of best practice and have an enviable reputation within the bay and within the whole of Devon. Only Devon Chamber and Exeter Chamber have a more active oganisation and a larger membership within the region.

The elections for the executive for 2018 followed with the existing comittee being returned en-bloc plus the additon of 3 new executive members Chris Bryson, Naomi Griffiths and Susan Laurie. Full details here.

Martyn Green was re-elected unanimously as Chairman. However, for personal reasons, he has since tendered his resignation.

Martyn said: ” It is with deep regret that I must advise that, due to illness in the family, I will have to immediately step down from both my capacity as Chair and from the executive in general.

“As you may imagine, this is not a decision that I have taken lightly but the situation is such that I feel that I have no choice. My responsibilities dictate that I need to clear the decks, so to speak, so that I can concentrate on urgent matters at home. I would like to thank you all for your support and commitment to both myself and the chamber.

“It has been a pleasure working with you and I wish you all the best for the future.”

Martyn leaves with our heartfelt thanks for his committment to the Chamber and to Brixham. Martyn, we will greatly miss your presence, your calm and considered leadership and your polite, amiable and self-effacing manner. We hope all works out for the best and we see you back at the Chamber again very soon.

Matt Crabtree has kindly agreed to cover both the Chair and Treasurer roles in the interim.