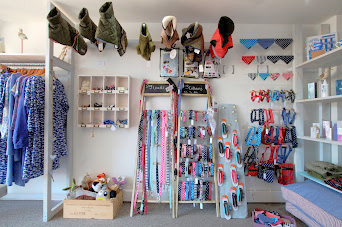 On paper, Bertie and Crew the newest shop on the marina in Brixham shouldn’t really work, selling as it does an off the wall mix of products for man’s best friend, clothes for their owners and coastal themed gifts. But in practice, half way through their first year the business is proving to be a success.

Charlie and Nicola, the owners are relatively new to the retail world. Six years ago living in a Dorset they attended a meeting to rescue the village shop from closure when the Post Office was removed – a month later after a gut feeling, they owned the shop and were undertaking a 6 week renovation job to bring the store, housed in an old chapel back to life.

Suggesting it was a steep business learning curve for them both, is they say an understatement, the couple suggest it was more like climbing Everest with no oxygen, plus a yeti strapped to their heads! However they turned the shop around, working 7 days a week and offering an eclectic mix of local produce and essentials such as toilet rolls and denture cream! At the beginning of this year they sold the shop as a going concern and their home of 20 years and embarked upon a business and house hunting quest along the South West coast, starting at Swanage ending at Brixham when they fell hook line and sinker for the town. 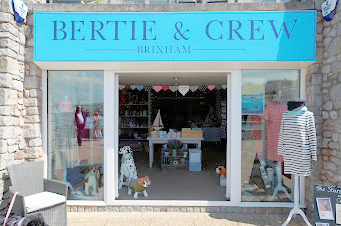 The retail bug couldn’t be contained for long and spotting an empty unit on the marina, following another of those pesky gut feelings, Bertie and Crew was born. Despite being a little way from the commercial centre of the town, Nicola and Charlie say they have been welcomed by local residents and other businesses with real warmth and the couples love of Brixham is reflected in the local artists work they promote and the prints they sell in support of Shoalstone Pool.

Often asked how the name, Bertie and Crew, came about they explain it is named after one of their four Springer Spaniels, so watch this space…. as the other three are clamouring for shops to be named after them too!