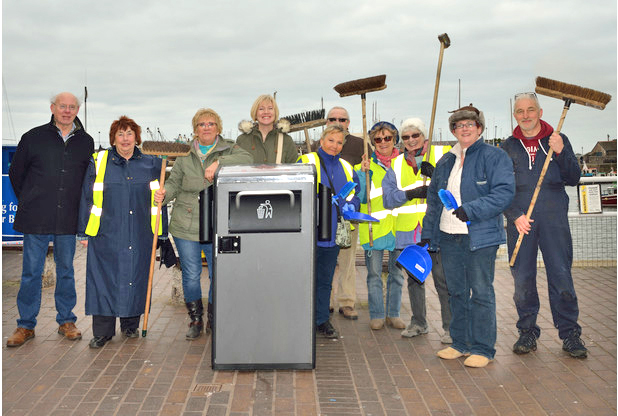 Brixham is to start an extended trial of ‘Big Belly’ bins to reduce litter around the harbour and cut costs. The solar-powered bins compact waste, giving them at least five times the capacity of the current bins. They also sense when they are almost full and send a signal to a control station to request emptying. It is claimed this reduces the number of collections and stops the problem of overflowing bins. The bins have a protected opening which means gulls and rats can’t get in. The trial involves six Belly Bins being provided free of charge during July and August around the inner harbour.

Brixham Town Council has agreed to support the trial, which is a project of Brixham Future, formerly known as the Brixham Regeneration Group. Project lead Nigel Makin said: “I kept seeing litter, with our seagull problem getting worse and worse. I was in Sidmouth in October 2014 having fish and chips when I came across a Big Belly bin and I found out more about them. In Sidmouth there isn’t a seagull problem in terms of rubbish anymore.”

Cllr Ian Carr said “There’s only a limited number we can get on a free basis. It’s about proving the bins will work and will handle the capacity that will be thrown at them in the peak summer season.”

Cllr Jackie Stockman said: “It’s a brilliant idea. During the trial we can identify where it’s working and where it isn’t, and it should assist greatly.”

If the trial is successful, each bin costs around £1,100 per year for five years, including servicing and maintenance, equating to £6,600 per year and £33,000 for a five-year contract for six bins.

Torbay Council said it will not fund the new bins fully but would consider a joint funding agreement with the town council.

A Torbay Council spokesperson said a similar trial of the bins has already started in Babbacombe: “This trial is all part of the work we have been doing with our grounds maintenance provider and the local businesses to improve the downs. Following the trial all feedback will be considered and will direct our next steps.

“With regard to the trial of these new bins around Brixham Harbour, it will start around June 20 and will last for eight weeks. There will be six bins in the trial and again the feedback and results will be looked at before a decision is made about how to move forward.”