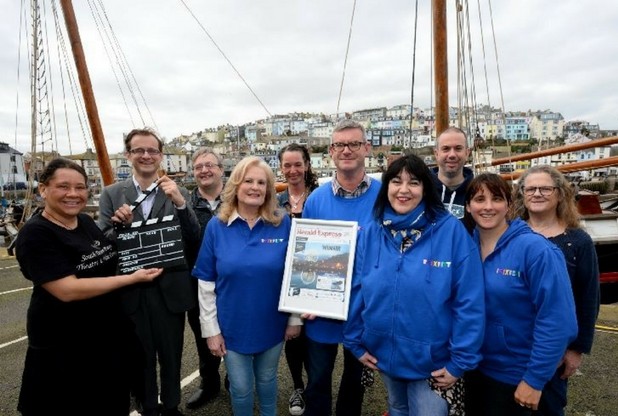 A mobile phone app in the style of the popular location-based game Pokémon Go is being developed to support the launch of a Brixham social history archive. The BrixFest project aims to gather audio and film testimonies about the port’s traditional industries and events and will also be supported by a film.

Local organisations hold some records of Brixham’s historic industries and events but much anecdotal local history detail is lost or degraded as it passes down the generations. This year-long project will capture as many stories as possible to preserve and share them as a community resource freely accessible to all.

The project has been awarded an £8,100 Heritage Lottery Fund grant made possible by National Lottery players. The grant will allow the BrixFest team, in partnership with local organisations including Brixham Museum, Brixham Town Council, Brixham Chamber of Commerce and South Devon College, to produce the archive. Its contents will also be used to enhance the physical Heritage Trail being launched as part of this year’s BrixFest which runs from May 27 to 31.

BrixFest chairman Sophie Bower said: “The first step is to identify elderly people who have worked in the industries for which the town is famous – for example ship-building, rope and sail-making and of course fishing – and who are willing to pass on their recollections, which is some instances span more than 80 years.”

Sophie, who has lived in Brixham for more than 25 years and has heard many such fascinating stories, added: “Many Brixham families have worked in a single trade for generations. Some have as many as three surviving generations of, say, fishermen or lifeboat crew members and we hope to involve these in joint conversations about the changes they’ve experienced.

“We’re also seeking people who were involved in local events such as exploring or visiting the now-closed Brixham Caves, or with Second World War memories of life in Brixham – for example, the extension of the Breakwater, building or manning The Battery and serving here while in the Forces. And we would like to hear from individuals who are willing to share their own relevant historic audio, radio or film recordings or photographs.”

Committee members have identified some candidates but are sure there must be dozens of others who would like to help to preserve Brixham’s folk heritage. Those who would prefer not to be filmed or recorded can instead provide a simple written testimony or tell their story to a BrixFest volunteer. Anyone who would like to participate is invited to free afternoon tea hosted by young volunteers at The Edge in Bolton Street, Brixham, on Sunday, April 2, when BrixFest committee members will explain more about the project. Anyone interested in providing testimonies can obtain a ticket by phoning 01803 858488 or emailing contact@brixfest.com. Anyone with mobility problems can use the same contact details to organise home visits or phone interviews.

At the end of the year-long project, all material – print, audio, film and photographic – will be digitised and stored on the BrixFest website where it will be freely available to students, historians and the merely curious. BrixFest’s intention is to extend the scope and depth of these archives over the years.

BrixFest, which this year has taken ‘heritage’ as its theme, is funded by local grants, fundraising events and donations from Brixham organisations and businesses. Material from the Lottery-funded project will be used to humanise the historic events which took place at each location on a Brixham Heritage Trail which will be given a spectacular launch during the festival.

The launch will include enactments of historic events by local theatre groups, church choirs, musicians and voluntary groups displaying and discussing, for example, historic artefacts, Second World War events and Brixham Cavern archaeological finds, in pavilions placed around the trail.

Information about the trail will be delivered to participants in a mobile phone app which will include out-takes from the recordings and the film, which is to be premiered at The English Riviera Film Festival in June. There will also be a printed map and a dedicated Brixham Heritage Trail website, which will include links to archived material held at other locations. The website will also be enhanced and expanded in future years to create an enduring publicly-available legacy.