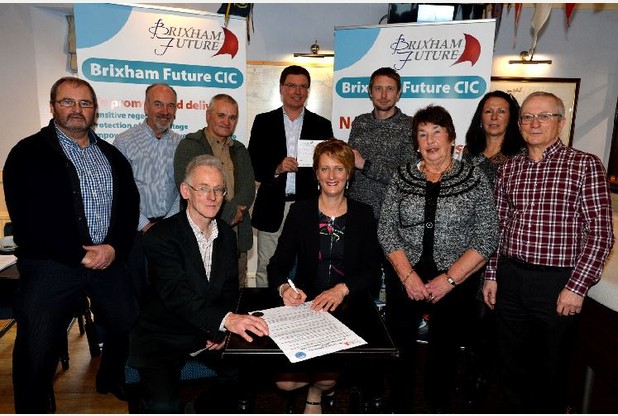 Brixham Future Community Interest Company has been officially launched at an event in the town. The regeneration company will work with Brixham Town Council and other partners to deliver projects for the benefit of the community.

Speaking about the event, interim chairman John Brennan said that it had taken a long time for the new company to come to fruition after several changes of personnel in the period since it was originally formed as a working group of Brixham Town Council in 2014.

“The original group was formed following the successful What Next for Brixham Conference in November 2013 but it was quickly recognised that for it to attract funding it would need to be separated from the council and stand alone,” he said. “At the same time Brixham Future recognises that while forming the new company it is important that the bond between the CIC and the council should remain and the board have signed a Memorandum of Understanding to that effect in order that we may work in partnership going forward.”

Councillor Jessica Stock, vice chairman of Brixham Town Council, congratulated the new CIC on its formation and wished it well for the future while presenting John Brennan with a cheque for £2,000 to help with its start-up funding. She said: “Brixham Town Council is greatly encouraged by the new company’s willingness to sign a Memorandum of Understanding between the organisations and their public commitment to the partnership which we hope will successfully deliver regenerational projects for the town’s benefit in the months and years ahead.”

In 2015 the working group delivered its first project to Brixham and Torbay Councils. The solar powered Belly Bins project currently resides with the latter authority and the two councils will enter into further talks about its potential delivery sometime in the spring.

“Several other projects are either in development or under consideration and if all goes well Brixham Future can look ahead with confidence,” said Mr Brennan. “We want to provide the community with every possible opportunity to get involved and for that reason in our initial recruitment phase we are asking for volunteers to step forward and apply for the posts of chairman, secretary and treasurer.”

To express an interest in the posts or become a supporter contact john@caracommunity.co.uk or telephone 01803 852270 by February 28.