Brixham Market – the plaice to be! 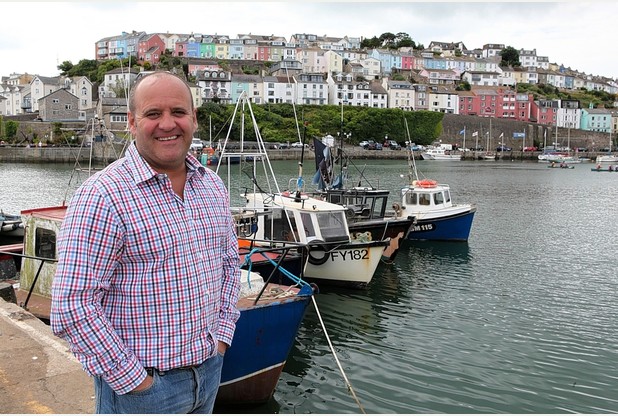 Barry Young is managing director at Brixham Trawler Agents which operates one of the largest fish markets in the UK. Here he talks to the Herald Express about his background and the fishing industry in general.

What is your background?

I left school at 16 and went to sea. I was a decky learner with Michael Sharpe who was the skipper of the Brixham based beam trawler The Sea Image. I worked on this trawler for about three years where I learnt the basic trade of becoming a fisherman – which of course meant everything else that came with my role as a decky learner, which was to keep everything clean on board especially the galley and sleeping accommodation.

I suffered from extreme sea sickness over this time but had to persevere as this was my chosen career. I learnt various skills during this time which led to promotion being called a deck hand.

I then jumped ship to another beam trawler The Mareverna which was skippered by Dave Blower. He took me under his wing and shared his great knowledge with me on how to become a good fisherman, he had faith in me that one day I could become a skipper of my own vessel. This at the time would have been a dream come true.
After serving with Dave for about three years I decided that, yes, I would like to take qualifications to become a skipper.

I started the course at Plymouth University and during the holiday periods I went back to sea. On one of these occasions, with no prior warnings, I suffered an epileptic fit and was airlifted from the boat. I suffered a dislocated shoulder and was unable to return to sea until this was mended so I carried on with my skipper’s ticket. Once I was well, I rejoined the De Vroew Marie but, unfortunately a few weeks later, I suffered a second fit, again dislocating my shoulder. From the doctor’s advice I knew I had to change my career path.

What is your company’s greatest achievement?

To date, the greatest achievement for Brixham Trawler Agents was being nominated and won the award of the UK’s Top Fishing Port 2015 in the Fishing News Awards. We went to the awards in Aberdeen earlier this year and were very proud to win this.

What has been your most significant achievement?

I would say, without a doubt, the biggest reward and achievement that has happened to me are my two daughters Holly and Amy. They make me very proud on a daily basis, both of them have done so well at school and university level and am proud to say I am their dad.

What other organisations and projects are you involved with?

Although my position at Brixham Trawler Agents takes up the majority of my week and weekends, I still try to get involved as much as possible helping with local events and charities. I am on various committees, for example, Trawler Race, Fishstock, Fish Man and Boy, SW Fish producers organisation and Fisherman’s Mission where I try to help to raise funds and promote awareness of these organisations. Fish Man and Boy, at the moment, has a lot of my attention as we are trying to raise the final funding for this bronze statue which will be sited at Kings Quay, Brixham. This is a memorial for all fisherman that have lost their lives working within the industry.

What does the BTA do?

We are a private company with some 130 shareholders, mostly form the fishing industry. We operate the fish auction in Brixham, supply fuel and ice to fishing and commercial vessels, provide a first-class agency and settling service and we welcome fishing vessels from other ports and other countries.

Brixham Fish Market started in the late 1800s with sailing smacks landing their catch on the Old Fish Market Quay. The present market was built in the early 1970s. This market is now in the process of a major development with the existing offices and market being modernised. A new quay and state-of-the-art market is also being built.

Brixham fish is well known for its quality in England as well as Europe, with a large percentage of our fish being exported. We are very fortunate to have good fishing grounds around us nine to 10 months of the year.

There is a variety of mainly modern fishing boats in our fleet, with larger Beam Trawlers who go to sea for seven to 10 days, catching the majority of prime fish i.e. Sole, turbot, brill, plaice, monk and escallops, also cuttle fish in the winter months which although is not classed as a prime fish makes up a large percentage of a beam trawlers trip. Cuttle fish is very popular with our continental friend’s especially Italy.

The smaller day boat fleet catch a variety of fish; most fish being caught are species such as red mullet, squid, seabass, mackerel, cod and lemon sole.

The fish is landing on a daily basis and is very popular with shops and local deliveries because of its freshness and quality, which has made Brixham the top earning port of England and Wales. We also have a small pelagic fleet that catch sprats, herrings, pilchards and anchovy’s (August to February).

The success of Brixham’s fishing industry was challenged in the beginning of the 20th century when the traditional sailing fleet could not compete with the new steam trawlers of the east coast ports around the important Dogger Bank fishing grounds and the dominant history of fishing in Brixham began to decline through the devastation of the First World War and on to the Second.

Paradoxically, it was the Second World War that led to the revitalisation of fishing in Brixham, with arrival of Belgian refugee fishermen to the town with their knowledge of diesel engines.

The ailing fishing industry started to rise again and by the 1960s the value of catch increased and the industry adopted larger Dutch vessels. A fishermen’s co-operative was formed and by 1969 the now 70 registered fishing vessels moved from the inner harbour to the site of the present fish quay and the new period in the history of Brixham fishing began.

BTA was formed in 1988 to fill the void left when port management company Brixham and Torbay Fish Ltd collapsed, now offer a full service to the fishing port of Brixham, including the operation of the fish market, provision of fuel for fishing vessels, production and provision of ice and a full financial settlement service facility for landing vessels.

The formation of BTA was facilitated by local boat owners and fishermen putting up the necessary capital to enable the company to be established. Shareholding is limited to fishermen and boat owners and the business operates in the style of a co-operative and has historically returned post dividend profits back to the industry by investing in new equipment.

It is through BTA that long term investment in the port has taken place. After many years of non investment BTA has committed itself as a company to reinvest profits, to the benefit of the industry and ultimate prosperity of the community of Brixham, in new graders, logistical infrastructure, dedicated lorry and trailer, a state of the art back room sales system and electronic auction and scales, much helped with grant aid from FIFG and EFF.

The port of Brixham has now re-established itself as the premier port in England in terms of catch value with over £26 million of fish landed in 2012. An important member of the top three fishing ports in England, situated in the South West; Brixham, boasts the lion’s share of demersal and shellfish catches.

Sixty per cent of the fish landed in Brixham is non quota, which substantiates the sustainability of the fishing industry and therefore the market in Brixham and with over 70 per cent of our fish being sold for export we make a contribution to both UK Plc and to the local economy.

How does the company benefit Torbay?

With BTA supporting the fishing industry, we probably create 1,200 jobs locally within our industry as we operate seven days a week. We also attract tourism to the area, every Wednesday through the summer months we put on tours to allow up to 30 people on the fish market so they can see what goes on behind the scenes. This proves to be very popular.

Who has been your most significant mentor?

I would say that my wife, Wendy, manages to keep me focussed on my daily life during my working week. She offers advice and helps me through a lot of my decisions, also at the same time holding down her own full-time job and supporting the family and me.

What challenges are you facing?

As an industry we face many challenges. At the moment, the toughest one is the current landing obligation where all quota species have to be landed. The fishermen have had to be innovative and forward thinking coming up with ways to dramatically reduce the amount of fish they have to discard. Over the years, the fishermen have been adapting trawls and mesh sizes so that the immature fish are able to swim away, which has obviously helped them to deal with the current legislation.