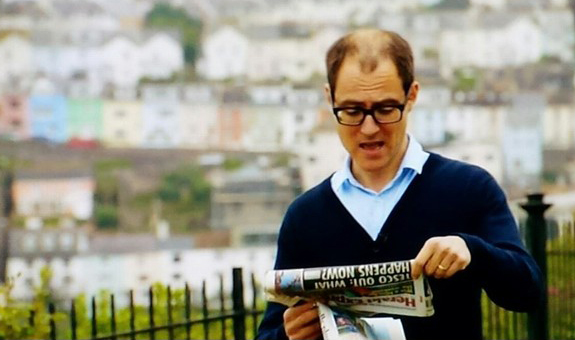 The episode, entitled Supermarket Wars, explored the reasons why Tesco, Sainsbury’s, Morrisons and Asda no longer dominate the food retail business and have seen their profits slump.

He said: “One place Tesco had designs on was the small seaside town of Brixham.

“Seven years ago, Tesco signed a deal with the local council to turn a scruffy car park in the centre of town into a new supermarket. To get planning permission nowadays supermarkets often have to provide extra redevelopment for local areas. In Brixham’s case, Tesco promised other shops, a larger car park, access roads and affordable housing, revitalising the town centre. Despite some local opposition, planning permission was granted just last year. But then in May, Tesco pulled the plug.”

He said Tesco gave the reason to the local press and he read aloud from the Herald Express: “Customers are increasingly shopping online and in convenience stores and we’re building fewer larger stores.”

Brixham councillor Chris Lomas told Mr Wallop in an interview: “Our High Street is dying. Walk along there and you will see a number of empty shops. Eighty per cent of families go to Paignton to do their shopping — a 10-mile round trip. We were looking at a minimum of 150 jobs and it would have been a tremendous boost to a town where unemployment is higher than the national average.”

Mr Wallop also interviewed Brixham Chamber of Commerce vice-chairman Keith Williams who said: “Most of the traders in the town were looking forward to it because we have a problem with most of the people who live here shopping at out-of-town stores and it would have given us an opportunity to compete against those and have local people shopping locally again. It’s a bitter blow.”

Mr Wallop said: “For years people complained about the opening of new supermarkets but now some of them complain about the opposite, having realised the benefits they can bring.”

He revealed that a quarter of all planned supermarket developments, including discount stores like Aldi and Lidl, have been put on hold or cancelled — and Tesco has pulled more developments than any other supermarket. It has shelved nearly half of all the stores it had been given planning permission to build.