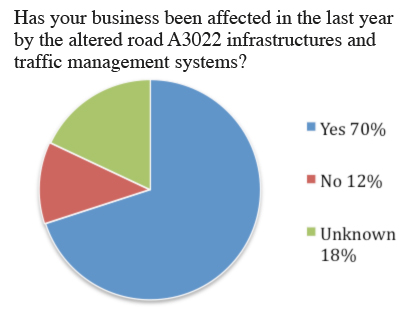 Roundabouts and synchronised traffic lights were just two suggestions made by traders in response to cries for improvements to traffic chaos into and out of Brixham. Brixham Chamber of Commerce carried out a survey of its members on the back of complaints about hold-ups and congestion for motorists.

The new housing at White Rock on the outskirts of Paignton is being partly blamed for the logjams. Seventy per cent of those who responded to the survey said their business had been affected by the altered road infrastructure and traffic management on the A3022. The traffic lights system there has been described by one trader as a ‘complete disaster‘ and there have been numerous calls for roundabouts to be installed instead. The latest set of lights there are considered unnecessary and cause tailbacks towards Windy Corner. One respondent said: ‘Brixham’s needs must be considered as the end-of-line user of the arterial road, as well as local residents when considering each new junction development.’

The online survey was conducted after a meeting with MP Dr Sarah Wollaston and Cllr jackie Stockman to discuss the impact new road and housing development is having on Brixham residents. Cllr Stockman has been calling for action to ease traffic hold–ups for several months. Particularly during the summer, motorists were regularly reporting taking more than an hour to travel between Paignton and Brixham.

Windy Corner is widely accepted as a bottleneck for traffic. While up to £300,000 is now available for improvements, 10 years after they were first discussed, no firm timescale has been agreed. Funding rules, however, mean the work has to be completed by 2018.

Out of 120 Chamber members surveyed, 28 responses were received. One trader said: ‘Traffic jams are a disincentive for people to visit Brixham, sadly the traffic and parking problems in Brixham are no secret. At the same time as roadworks, there have been fewer ferries and both result in fewer visitors. For those that do make the trip, if they are stuck in traffic this is not a great experience and will put some off revisiting.’

Another said: ‘Many tourists this season sought alternative destinations to avoid traffic. This has resulted in reduced business and disgruntled holidaymakers.’

It was also reported that local trades people and suppliers had refused to come to Brixham as the traffic was so bad. The survey concluded: ‘Brixham businesses have been affected financially by the new road infrastructure, which has increased the amount of time people have taken travelling in and out of Brixham. It appears that these road infrastructure changes have impacted on visitor numbers.’