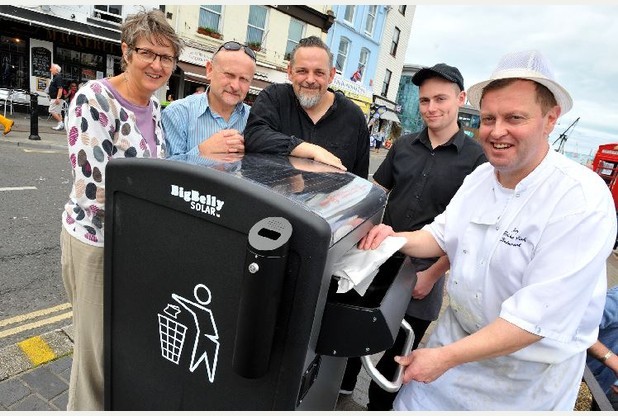 Angry councillors have slammed the ’embarrassing’ decision to end a trial of BigBelly bins in Brixham just halfway through — and have vowed to fight for their introduction across the Bay.

But when Brixham Town Council gathered on Thursday night they were given a fuller explanation about some of the issues which plagued the four-week experiment.

She said the initial roll-out of the bins was delayed for a week because ‘it fell on the week where one of the main officers was on leave’. When they were in place bins were not emptied because ‘keys hadn’t been passed on to the operatives’.

The high-tech bins were supposed to send a signal when they were full but problems with computer software involving both Tor2 and Torbay Council led to issues and bins were emptied ‘whether they needed to be or not’, said the report.

Other problems included ‘operatives on the ground’ not being sure how the new bin collecting procedure worked. New liners ‘promised at the start of the trial didn’t arrive till week three’, the clerk said. When they did they were not compatible with the hoist mechanism.

Brixham was provided with six bins for the planned eight-week trial. The trial was meant to continue until August 20 but in the end the bins were in place just 26 days.

It was hoped the bigger bins would save money for the council because of fewer collections, but when problems collecting the weighty bins became known Torbay Council agreed to pay for an extra worker to help, the meeting was told.

Torbay councillor Richard Haddock, addressed the meeting in his role as executive lead for business.

He was given a round of applause by members of the public and some town councillors after telling the meeting he would demand answers from Kier Group, which has a 10-year contract with Torbay Council to run waste collection services as part of the Tor2 partnership.

He said: “That contract between Torbay Council and Kier can be renegotiated this autumn and we’ve asked for that to be done. All contracts are amendable.

“We have to sort this problem out.”

Earlier town councillor David Giles had proposed a motion stating Brixham’s ‘dismay’ at the decision to end the trial, branding it an ’embarrassing failure’. But after Cllr Haddock promised to meet with the operators it was withdrawn.

Cllr Giles said: “The withdrawal of the BigBelly bins trial earlier this week proves beyond any shadow of doubt that if we set out to fail we will.

“This is against a backdrop of success everywhere else in the land where they have been introduced. What is the difference between Torbay Council and those other authorities?”

He also questioned the length of the contract with Tor2 and whether it should be reviewed and asked for negotiations to ‘get this thing back on track’.

“This is a much-needed improvement, especially in terms of litter in the harbour. It is an absolute no-brainer. It is successful everywhere else in the world. What an embarrassment Torbay Council and Tor2 are.”

Cllr Mike Morey said ‘lambasting Torbay Council was not the right way to go about things’. He agreed the BigBelly bins appeared to be a cost-saving solution but the trial had ‘created a lot of additional costs’.

Cllr Ian Carr said he believed BigBelly bins would ‘make a massive difference’ as other bins would fill up quickly and lead to more collections.

Cllr Paul Addison said Babbacombe in Torquay has run a successful trial of the bins without any health and safety issues.

“We need a fully costed report of this from Tor2 or the council to show us the reasons for dumping it,” he added.

Cllr Jessica Stock said she ‘strongly urged’ Torbay Council to act and support the BigBelly bins because of the improvement they made to the environment and cost savings.

Chairman of Brixham Chamber of Commerce, Jacqui Shaw said “How embarrassing for Tor2, and in particular Torbay Council and Kier, that they’ll be the only provider failing on a solar bins initiative in the UK. We had hoped that they would embrace solar bins as all other providers have in the UK, that Brixham would benefit from the manpower saving and that we could then reinvest the manpower to other tasks. Tor2 had no intention of allowing this project to be successful and we’ll be pursuing this matter in more depth with them. We urge the council to look seriously at the terms and conditions of their contract with a view to finding another more forward-thinking and collaborative partner.”