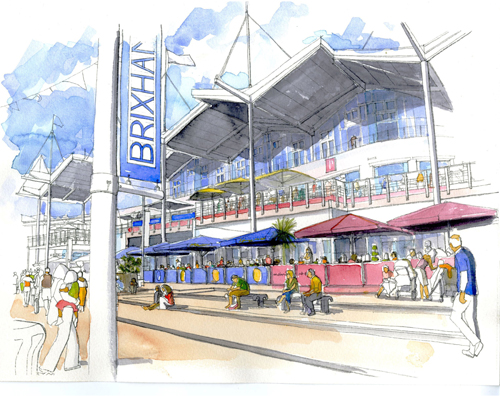 Brixham Town Council could be set to form a new group to work with them on regeneration matters. That is the recommendation from a conference looking at the future of the port.

Brixham Community Partnership hosted the full-day public ‘What next for Brixham?’ conference at the Berry Head Hotel. It was designed to discuss how the community could best work together on the future development of the town.

People split into groups to discuss development priorities and how these could be achieved.

Around 70 people attended for at least part of the day, and nearly 50 were present when a vote was taken to determine the recommendation put forward.

David Giles, vice-chairman of Brixham Community Partnership, said: “It was a very good cross-section with businesses, local politicians, people from organisations, a fair smattering of new faces and kids from the local college who made a big impression. They had good, open discussions and came to a common view, but it can only be a recommendation. The recommendation was the council takes the lead and forms an advisory group of people with competent skills who could work with it to come up with good policies for the future development of Brixham and move things forward in a single direction. We’ll put the recommendation to the council and hope it takes up the baton.”

Town council chairman Cllr Brian Harland said the event went ‘very well’ and ‘came to quite a sensible conclusion’. He said: “It’s up to council members to debate the situation and say where they stand on it. We don’t know yet which bodies would be represented on it. There are two regeneration groups at the moment, Brixham21 and BERAG, but Torbay Development Agency doesn’t want to be coming to two separate groups doing the same thing. There should just be one group. You’ve got to have one voice speaking.”

Brixham21 chairman and town councillor Chris Lomas said it was ‘not sensible’ to have more than one regeneration organisation in Brixham. He said: “If a new group is created under the town council, Torbay Development Agency will be obliged to work with that new body. I think it likely that B21, without the TDA as a partner, would see no point in continuing. Twelve years’ worth of accumulated expertise, including contract negotiating skills at European level, might disappear. Steve Parrock said at the conference that none of what has been achieved in Brixham in recent years would have happened without B21. This group has pushed over £25million of investment into the town, up until today. When the town centre build is finished that figure will be over £50million, and when the Northern Arm and other B21 projects are completed we’ll all be benefiting from more than £100million of inward investment. Depending, of course, on whether Brixham21 survives.”

The public is welcome to attend the next community partnership meeting at 7pm on Tuesday, December 10, at Brixham Rugby Club.