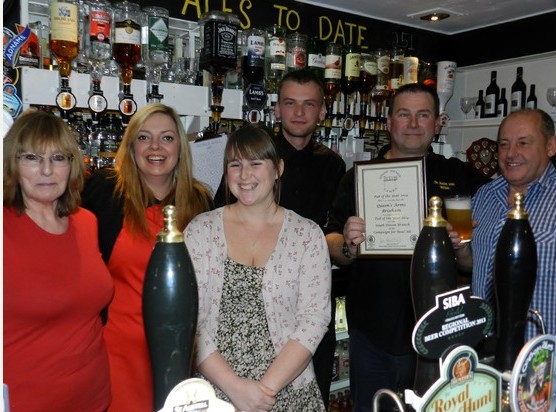 The Queen’s Arms in Brixham has been crowned the South Devon pub of the year. The pub in Station Hill topped the vote by local Campaign for Real Ale (CAMRA) members on the quality of its real ale as well as its decor, value for money, customer service and community focus.

Landlord, Chris Simmonds, has run the pub for just over two years, and in that time served more than 250 different real ales. Before Christmas, the pub held its first charity beer festival featuring more than 20 beers from across the country, with an emphasis on local brews. The three-day festival raised over £1,300 which was divided between Shoalstone Pool and Papworth Hospital.

Chris was overwhelmed when told he had won the award, placing his pub top of the 29 pubs the branch is allowed in the annual Good Beer Guide. The branch area extends from Salcombe to Teignmouth on the coast, and up to the middle of Dartmoor.

Chris said: “The award is not just for me, it’s for the people who use the pub and the staff. I’m very proud, not just for me but my family. Both of my brothers have pubs in Peterborough and one was the winner there and the other was the runner-up. I’m proud to keep up the family tradition.

“The Queen’s Arms was all but closed when I took it over. It’s a tough time for pubs and it’s nice to be recognised for raising the standards.”

CAMRA has announced its local pubs of the year to help launch Community Pubs Month. The local branch winners will go forward to the regional heats in their quest to become national pub of the year, announced in early 2015.