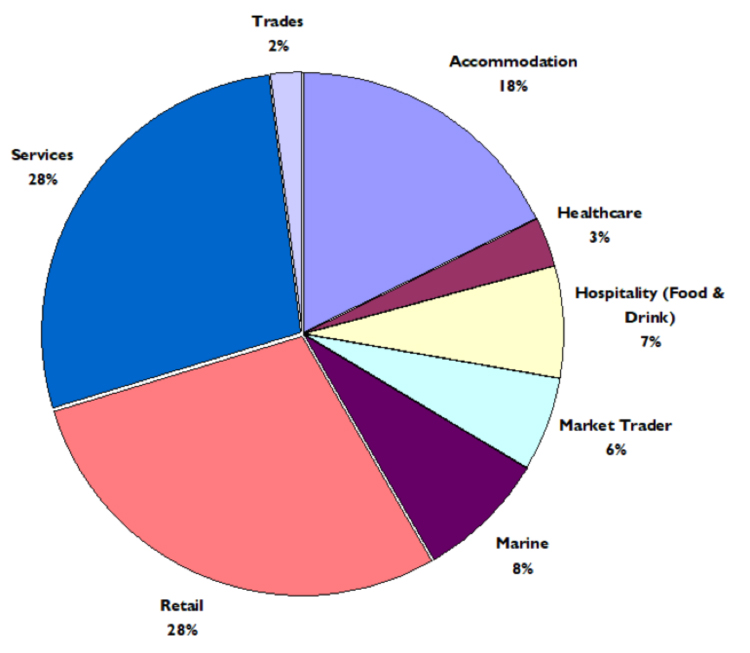 Before I begin on our various initiatives, I would like to thank every member of the executive for their dedication and commitment to both the Chamber and the community of Brixham. Their contributions have been vital to the success of the Chamber this year and they have freely given of their time and expertise with no thought of personal reward. They have been a pleasure to work with and I am very proud to be associated with them.

I would also like to thank Pauline Neale, who, while not a member of the executive, has also been busy on both the Chamber’s, and the Community’s, behalf. She undertook the administration of the Business Show and is currently working on the Tidal Bell project. Well done Pauline. Thank you also to Mike Franchi for his work on our websites and helping to keep us all up to date throughout the year.

Apart from our usual administration, the year started with members of the Executive Committee manning a Chamber Stand at the tourism exhibition on the 15th March, 2017, an activity that we have already booked to repeat at this year’s event. Our goal was, and remains, to increase footfall in Brixham by promoting it to as wide a market as possible.

The stand was very busy with lots of compliments for Brixham, the Chamber, our new guide to Brixham and the markets.  Generally it was a good exhibition overall but the new guide, which we have created, funded and widely distributed, attracted a lot of favourable attention. Over the season it proved to be a great hit with tourists and we distributed 30,000 copies in accordance with our goal of attracting visitors to Brixham. Our thanks to Liz Pippett for her hard work and contributions in this, and other, areas.

With the town preparing for the season, we lent our support to various projects, including financially contributing to the hanging of flower baskets in Middle Street, undertaken by Pride in Brixham. We enjoyed supporting this, especially as it helped to make the area look so bright and cheerful. We also awarded the prizes for our bunting initiative and were able to give Brixham Town Council more than enough bunting to make the town both colourful and interesting. This was a real community effort, with local residents, many voluntary groups, such as the WI, Pride in Brixham, Friends of Furzeham, Fairtrade and supporters of the lifeboat crew, getting involved. Our thanks in particular to Sandy Richards, from the Brixham Sewing Box, and Mary Constance, WI, whose kind contributions helped to ensure the success of the project. We saved the Town Council £1,000, which they were able to use on other community projects. The bunting, with each string accompanied by a unique piece of artwork, was a great success.

The pictures created by Brixham residents and used to decorate the bunting can still be viewed online at http://online.fliphtml5.com/fvzy/qppz/#p=1 .

In addition to these preparations, we again funded – and put up around the town – the new event boards and some new maps that we commissioned. As before, the Chamber paid for these in full. This coming year, we have saved money on these boards by designing them ourselves. They should be in place before the AGM.

We also designed and provided a map for the PirateFest guide, sponsoring the publication of their leaflets so that they could be distributed as and where necessary. This cost the chamber £1500. We also supported Brixfest with another £1,000.

During this time, we also lobbied Torbay Council and other bodies on issues ranging from urban regeneration to CCTV and parking, not to mention threats to green spaces and other issues as they arose. We also corresponded with, and gave support to, other Brixham organisations in their preparations for the coming season, along with several new businesses. My thanks in particular to Nigel Makin, who tirelessly corresponded, researched approaches by other town councils and attended meetings to the benefit of the Brixham community.

Our treasurer, Matt Crabtree, while keeping close track of our finances,  also looked closely into governmental changes likely to impact upon Brixham businesses and made several presentations to members on these and other issues. Thank you Matt.

Alex Foley kept members informed on a number of issues, not least of which was the Seafood Coast initiative, and corresponded widely with people in his drive to ensure the success of this wonderful project. Behind the scenes he also undertook a number of tasks to help others on both the committee and beyond. Thank you Alex.

Getting ready for the market season is always a costly affair, with licences and insurance to be arranged and paid for. However the market is a continuing success and achieves several aims for the chamber and, ultimately, for Brixham. These include providing an income – invaluable for enabling us to support Brixham through various initiatives – and also helping trade in the town through increasing footfall. However they also provide a platform for starter businesses, with several market traders now owning and operating shops within the town.

This year, in addition to the Saturday and Sunday fortnightly markets, we continued to run the Wednesday market, matching this to a coach and flyer initiative designed to increase the number of coaches visiting Brixham. This made a big difference to the town on days when the ferries weren’t running, helping to reduce an impact that might have otherwise proved even more negative.

My thanks to Chris Slack and Ian Didlick for their many contributions towards making the markets the success that they are.

Over the season, we lost a lot of market days to bad weather – the most in one year since the markets started – but by concentrating on providing best value for our members we were able to largely reduce the negative impact that this might have otherwise had. We may not have had anywhere near as much money to invest as normal but what we had we used to best advantage. Considering that our income reduced from £32,000 the year before (approximately, exact figures will be in the treasurer’s report) to £18,000, we did the best that we could with the finances that we had available.

Thanks to Pauline Neale, who voluntarily undertook the running and administration of this show on the Chamber’s behalf, it was a great success. It was a wonderful example of what we can achieve in Brixham and demonstrates the variety of businesses that we have in the surrounding area. The showcase from BMW out the front with their cars was a really good addition.

A big thank you to Liz Pippet and Claire Talbot from Devon Chamber for their assistance on the day, which helped to ensure that everything ran smoothly.

In addition to our cash donation, we helped to secure some sponsorship for the council to try and bring down some of their costs. Between their savings of £1,000 on the bunting, £600 on the tree and a cash donation of £250, we were, despite the reduced market income, able to provide some very tangible assistance.

Over the course of the year, Lynne Peats has regularly corresponded with new and existing members, acting as a highly efficient liaison that has helped us to keep abreast of their ideas and concerns. Thank you Lynne. The graph below shows our membership distribution in terms of trade sectors.

We finish the year with 112 members, which is very good considering the changes that we made in relation to the way in which we are now collecting memberships.

We finish the year in a flurry of considerable correspondence with, and lobbying of, Torbay Council and Harbour authorities regarding parking and the Oxen Cove development. We are also working on several other initiatives that will be of considerable benefit to Brixham. More on these to follow.