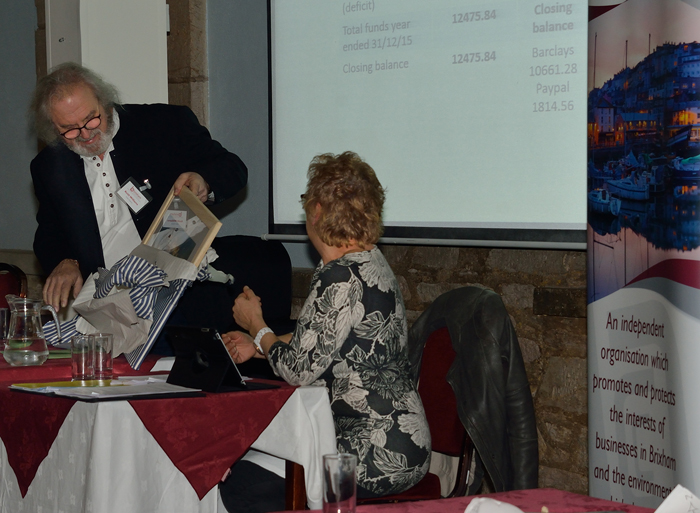 Brixham Chamber of Commerce is going from strength to strength and has ambitious plans for the com­ing year. The third largest in the county after Exeter and Plymouth, mem­bership of the chamber is thriving and deter­mined to continue to support and promote businesses in the port.

The chamber’s annu­al general meeting heard that much had been achieved in the last 12 months and thoughts have already turned to making more improvements in the coming year.

This summer, the hugely successful weekly craft market is to expand and will con­tinue to run on Satur­days, with the addition of Wednesdays. New chairman Jacqui Shaw explained : ‘It’s important we take that step as if we don’t, someone else will.’
The chamber’s main source of income is generated from the markets, both the art and craft market and the Sunday produce market.
Markets are known to increase footfall sig­nificantly and visitors also generally spend money in other shops while they are in town, with a reported 57 per cent spending. They enhance the visitor experience , bring a sense of com­munity, encourage small businesses sup­port the local economy and create jobs.

Jacqui said: ‘We have to make it attractive to make people want to come here. ‘Markets are a good way to do that, they create a focal point and make the town a lively place to visit. ‘We know the tou­rism and retail BID failed, but we as a chamber chose to be proactive, every single penny made from the Wednesday market will be spent on promoting Brixham.’

Aims for the coming year include working in partnership with agen­cies, including the Torbay Development Agency, Brixham town council and Torbay Council; growth of membership; continuing to lobby for the promo­tion and marketing of Brixham as a destina­tion for tourists and business; improvements to sig­nage and the town cen­tre ; support for innovation; encouraging residents to shop in the town and increase footfall.

Jacqui added ‘We need to maximise every available parking space, signage is  important for footfall and vehicles.’

Chamber cash has been donated to vari­ous town events, in­cluding the Pirate Festival, Brixfest and Furze­ham Green as these kind of festivals ‘put Brixham on the map’.

The Brixham cham­ber is now affiliated to the Devon Chamber and has built a strong relationship with the town council. Last year’s inaugural business show was a ‘resounding’ success and is going to be repeated in September.

A special presentation of a Brixham print was made to retiring chairman Keith Williams for his extraordinary contribution to the Chamber and to Brixham over a number of years. Jacqui also thanked the executives who were standing down at this AGM  including Anthony Blackaby,  Sophie Bower, Bridget Bowring and Pauline Neale. The executive officers for 2015-2016 are here.