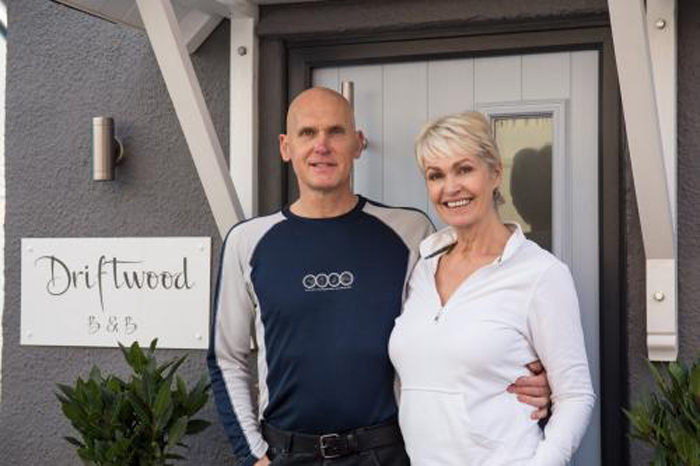 Driftwood B&B, Brixham to be featured on 20th June, 9pm on Channel 5.

In 2013 Keith Hutchison and Zoe Calvert were searching for a coastal B&B on the south coast for a lifestyle change. After many months looking they decided on one last visit before calling it a day. Keith fondly remembered Brixham in Devon from a couple of family holidays there. Zoe, had never even heard of Brixham before. So it was, on a very cold, wet birthday weekend in October 2013 they arrived. Despite being supposedly out-of-season Zoe absolutely loved Brixham. She had booked a viewing for the former Brioc Hotel at 11 Prospect Road. Other than the location and the stunning views, first impressions of the Brioc were not positive as the property was in a very poor state of repair, it appeared to have damp issues and they thought the price unrealistic: Everyone had been put off by the amount of work required and the investment it would take. Just the sort of place to challenge the risk-averse – so they went for it! They completed their redevelopment of the property and renamed it Driftwood B&B, opening for business a the start of 2017.

Their journey was filmed as part of the CH5 TV series, Our Dream Hotel, to be screened on Tuesday, 20th June at 9pm.

Zoe said they became involved in the show by chance, after someone from the production company spotted the property. She said: “We wanted to get the roof sorted out because it was covered in moss. The scaffolding had gone up and Keith got a phone call from someone who had seen it and wondered if we were refurbishing it all and whether we would be interested in the programme. People came and interviewed us and said there would be no money involved but it would be publicity for us.”

Keith said “Most TV shows about hotels focus on ones that are failing and attempts to turn the business around, but this one is aimed at people who want to get into the industry but don’t know how to get started. It gives people an insight into how it happens and the benefits and pitfalls. With broadcast having been delayed nine months, let’s hope it’s worth the wait and it’s good entertainment, generating increased interest and visits to Brixham to the benefit of all tourist based businesses in the town. Enjoy the show, however, we’ll be watching from behind the sofa!”