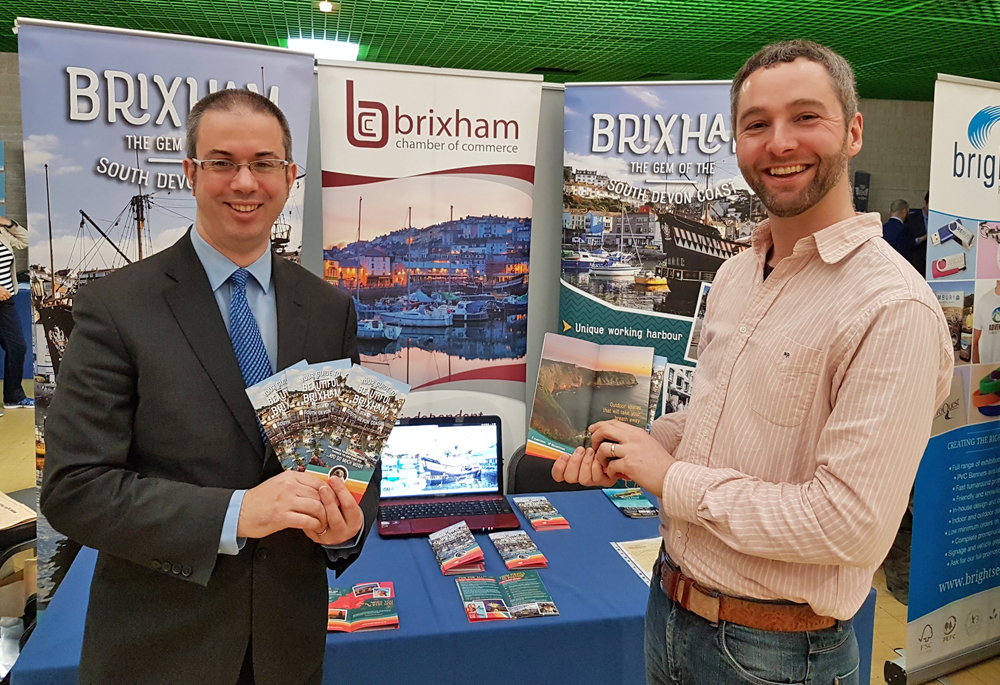 Firstly, I would like to thank each member of the executive for their hard work and support for the year.  This year has very much been a team effort and all those on the executive have made my job much easier.  I would also like to thank Mike Franchi for his work on our websites and helping keep us up to date.

As many of you will know The Chamber started the year with Martyn Green in the position of chair.  Unfortunately, due to personal reasons, Martyn had to stand down shortly after last year’s AGM.  Martyn was an excellent chair and so it was with sadness that we had to accept his resignation.  I would like to thank Martyn on behalf of the chamber for all the hard work that he did while he was chair.  He has also remained a supporter of the Chamber since his resignation and has once again provided the artwork for our event boards free of charge, for which we are once again very grateful.

Martyn’s resignation did mean that we had to reorganise fairly swiftly.  The reallocation of roles did take a little bit of time and I agreed to act as standing chair.  Thankfully the chamber was in a good place when I took over and there was no need to make any major changes.  Once the new roles had been allocated it was very much business as usual.

Summary of the year

This year has been a year of consolidation for the chamber.  We started the year with our funds still depleted and so it was important to try and increase our reserves to give ourselves a bit of a safety margin going forward.  This has meant that we have had to be very selective on where we can spend the Chamber money.  Even with this restriction and the disruption at the beginning of the year, it has still been a busy year for the Chamber.

At the beginning of the year we once again had a stand at the tourism exhibition.  Our aim was to promote Brixham and increase footfall in the town.  The exhibition was attended by local business and also a delegate of national travel companies, looking for reasons why they should visit Torbay and what activities they should offer their customers when they were here.  Our stand was very busy with lots of complementary comments about Brixham which was nice to hear.  We felt that the show was a success and so will be attending again this year.

We also used to the show to launch our new Brixham Guide for the season.  This was a continuation of the project that we had started in previous years with the aim of attracting tourists to Brixham.  We printed 30,000 of the guides and once again demand outstripped supply with guides being requested and stocked as far afield as Yorkshire , Derbyshire and of cause the West Midlands { m4 / m5 corridor ]  . We saw an increase in guides being requested from the south coast such as Brighton and Bournemouth and London’s uptake was bigger than 2017.

Locally our big distribution was via the Premier inn and Travel lodge brands and Holiday centres in Dawlish and Teignmouth, plus major attractions in the area.

We funded the event boards and updated the maps that you may see dotted around the town and Torbay.  We have once again managed to keep the cost of these down by using artwork produced by Martyn Green.  We have had good feedback on the design and so we replicated this for 2019.  The Board at North Pier in Torquay was very successful [Western Lady Departure point]. When 3 ferry’s running at full capacity which they did on many days last year, they were bringing on average 2.5-3k people per day into Brixham.  All of which would have been able to see the board.

We once again produced a leaflet for coach drivers.  This is given to coach drivers when they arrive in Torbay to give them ideas for day trips and activities for their customers.  The feedback we have had from this has been very positive and so we will be doing this again this year.

The best performing posts were, the Pirate Festival video of the Nao Victoria, Brixfest Events and any photo’s or event postings.

Many thanks to Liz Pippett for all the work she has undertaken in this area.

Following the loss of a significant amount of markets last year I am please to say that the weather was much kinder to us this year.  The Art and Craft markets on Saturdays and Wednesdays have proven to be a real draw and we have had a good number of stalls at each market.  Preparations are already well underway for this year.  The Saturday market is already almost fully booked and we are still receiving new applicants.  This should hopefully mean that this year’s markets can be as successful as last years.  The Sunday markets once again covered their costs and the number of stall holders is on the increase.  We are working to increase the size of the Sunday Market and while it is covering its costs we are happy to continue this year.

We feel that the markets achieve several of our aims.  Firstly they act as a draw to Brixham increasing the number of people in the town.  They also act as a platform for small start up business to try out their products.  We have had several market traders over the years move from the market into their own shops.  Finally, it acts a revenue stream for us and allows us to fund some of our initiatives that we simply would not have the funds to do otherwise.

I am pleased to say that the market’s will be running again this year and want to take this opportunity to thank Chris Slack and Ian Didlick for all their hard work running the markets.

Once again, we have held a course of general meetings over the year that are open to all.  We have had a wide range of speakers at these meeting which have covered a wide range of topics.  We have welcomed representatives from Torbay Council updating us on the plans for the town carpark and oxen cove. This gives people the opportunity to ask direct questions on plans that will affect a large amount of our members.  It also allows us to plan for changes that may be coming up.  We have also had some inspirational speakers who have told us the story of how their business came to be.  We also offer our members slots at the meetings in order to promote their own businesses.

We try and include topics that will be informative and interesting and to have a relaxed atmosphere with plenty of participation.  These meetings have many benefits.  They help to inform on current issues and events that are happening in the bay, they allow us to tell you what we are doing, and they allow you to meet other members to share ideas.

We are planning to continue these meetings this year but we are always reviewing the format to make sure that they are still relevant and interesting.  We may also put on some networking events without speakers, as we tried at Christmas, to keep things interesting.

It is difficult to continually find new interesting and relevant speakers but Alex Foley has done a great job of this throughout the year.  I would to thank Alex for all his efforts.  I would also like to thank all of the speakers that we have had at the meetings this year and hope that they found them beneficial.

Throughout the year Lynne Peets has often been the first contact for many members in the town.  Lynne cares passionately about Brixham and always tries to help in any way that she can.  We are lucky to have Lynne on the committee and I thank her for all her work.

At the last count we had 111 members which is fantastic given the size of our town, although I know Lynne is always trying to attract new members.  Our members are split as follows:

Although we had to watch the amount that we spent this year we were still able to makes some small donations during the year.  The total that we donated this year amounted to £1,370.  The donations were as follows.

During this year we have also made representations to Torbay council on various issues, Including the town centre car park, which seems to be a constant theme, the proposed oxen cove development, and litter in the town.  We have attended numerous meetings where we were able to raise concerns and put our viewpoint across.  This takes a lot of time and effort for sometimes not much reward but it is a fundamental part of what we do and so we will continue to put as much effort into this as possible.

Our exec committee have also been involved in other initiatives outside of the chamber.  Notably Alex Foley who put a lot of work into promoting the “Sea Food Coast”.  This will be going ahead again this year and is a great opportunity for Brixham Business’s.

This last year has been a very busy year.  The chamber has achieved a lot, but there is still a lot to do.  I am looking forward to working with the committee, once again, this year on new initiatives and ideas while still following through on projects that we have already started.

Finally, I would like to thank all of our members as it is because of the number of members that we have a voice and are able to achieve what we do.

Following the difficult year that we had in 2017 we started the year with depleted funds.  I had initially budgeted that we needed to finish the year with cash reserves of at least £10,000 in order to meet out planned expenditure at the beginning of the year.  We actually achieved cash reserves of £9,865.20 which did leave us a bit short.  However, because of the membership subscriptions that we received in January and February this was enough to cover the expenditure due before the market income started coming in.  Starting the year with such low reserves did mean that we have once again had to be very selective when considering new items of expenditure until we knew with certainty how much income the markets would generate.  I am pleased to say that the markets have performed very well this year and we finished the year in a lot better position that we started it.

The income received from membership subscriptions in 2018 amounted to £3,640 compared to £3,460 received in 2017.  This increase is actually partly due to the timings of receipts rather than an increase in membership.  The membership has once again remained fairly static during the year.

Overall the total income from all sources increased from £22,589.50 in 2017 to £25,020.00 in 2018.  This meant that we did achieve our target of increasing the chambers funds and were also able to release some funds for extra expenditure towards the end of the year.

Behind market expenses, tourism expenses were once again our largest expense.  This expenditure included funding for the event boards that are placed at various places around the bay, the cost of a leaflet that is aimed at coach drivers to encourage coaches into Brixham and also included the printing and distribution of our Brixham Guide.

The Chamber also made donations to local groups totalling £1,370 in the year as detailed in the Chairman’s report.

You can download a pdf of the accounts here.

You can download a pdf of the End of Year Report here.