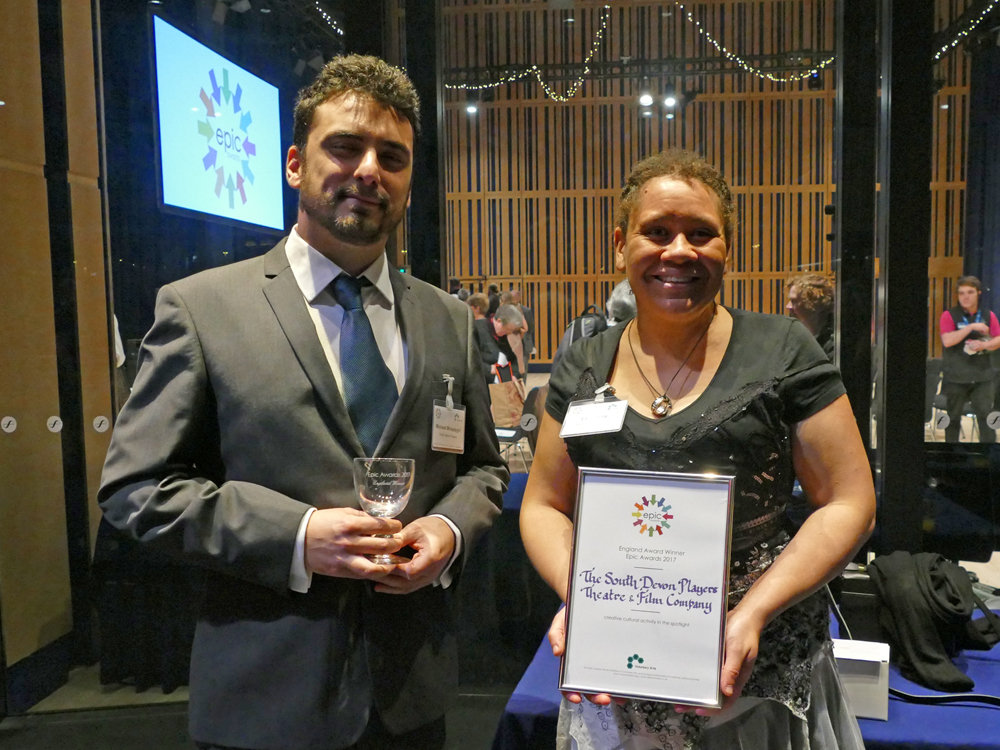 The South Devon Players Theatre & Film Company are excited to announce that on the evening of March 19th, 2017 at an awards ceremony at the Sage conference centre in Newcastle, they were presented with the Epic Award for England. Laura Jay, one of the founders, and Michael Mirsadeghi, who is the head of editing, and cameraman of the Players current 6th Century Arthurian feature film Mordred, travelled to Newcastle to collect the award on behalf of the team, but as Laura feels it important to point out, this has been earned by efforts and collaborations of the entire team, not by any one person.

There is growing recognition in the media and in public policy of the importance of everyday participation in creativity. The Epic Awards shines a spotlight on the incredible achievements of these groups each year. Winning groups are those that demonstrate the four Epic qualities – Engagement, Partnership, Innovation and Creativity.

Matt Hancock MP, Minister of State for Digital and Culture in the UK stated “”The fantastic work of the South Devon Players shows what can be achieved by the ingenuity and determination of arts groups.”

This is wonderful recognition for a group which was founded by local Brixham performers, 11 years ago, on the proceeds of a carboot sale, and has grown into a vibrant theatre & film team, who perform newly researched historical shows around Devon, and whose film work is gaining recognition and awards abroad. In addition the Players work hard to promote the skills of local creatives, with workshops and training, networking events, and involvement with other local organisations.

The award will stand next to the Torbay “Creativity In The Community” trophy won in 2010.

The group are currently in rehearsals for their summer stage show, a steampunk theatre production telling the story of the mysterious Victorian killer known as “Jack The Ripper” and also busy fund-raising for the final few days of filming their 6th Century Arthurian feature film, Mordred, the trailer for which is already selected for screening at international film festivals, in Hollywood, New York, Barcelona, as well as at Torbay’s very own English Riviera film festival.

All assistance in promoting the crowdfund and the project is much appreciated.