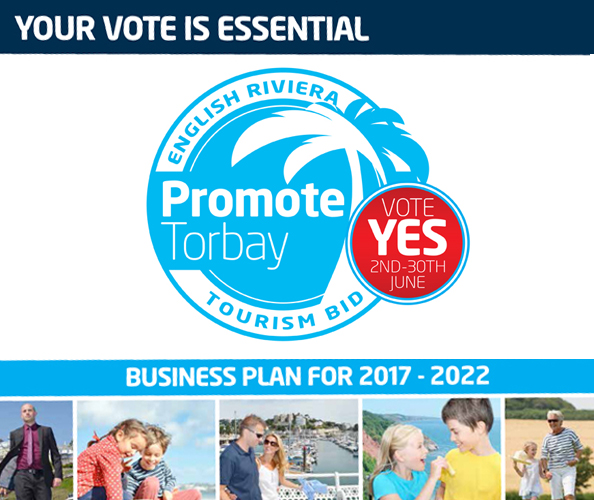 A landmark stage has been reached as the business plan for the proposed English Riviera Tourism Business Improvement District has been revealed. If successful, the initiative will raise £3million to promote the English Riviera brand worldwide at a time Torbay Council has confirmed, due to austerity measures, a zero budget for tourism promotion.

Among the ideas for the future marketing of the English Riviera include a national Sky TV campaign to target staying visitors, a refreshed visitor information service and a new national destination guide.

The plan will be sent out to businesses this week, with the key objective to protect and grow the year-round value and volume of Torbay’s £4.6million tourism industry, which currently provides 11,600 jobs. Over 60 local businesses have stepped forward to be Ambassadors to support the launch of the proposed BID.

Laurence Murrell, chairman of the ERTBID steering group and managing director off the TLH Resort in Torquay, said: “Strength comes from partnership. I have become involved with the set-up of the ERTBID proposal because I believe it is so important, not just for tourism, but for the whole community.”

Edward Bence, owner of Berry Head Hotel, added: “Tourism was, is, and will be well into the foreseeable future one of the core businesses and employers in the south west. Without the ERTBID there will be no funding to promote our area. For that reason the Berry Head Hotel is fully committed to voting YES and we urge as many as possible to do likewise.”

The proposed ERTBID was also backed by Susie Colley, chairman of the Torquay Chamber of Commerce at the Torbay Business Forum breakfast.

She told delegates: “If we don’t support the ERTBID then Torbay will never recover. We can all do this together if we support it. We should silence those who are trying to pull Torquay down by being bigger and better than them as Torbay can be fantastic.”

1,000 eligible businesses will vote on the proposals in a postal ballot taking place from June 2-30.

The key objectives of the plan are to protect and grow the year round value and volume of Torbay’s tourism industry, maximise sustainable funds to invest in coordinated promotion and to support the tourism sector in maximising turnover and profits.

The launch of the final Business Plan follows feedback and consultation from the tourism and hospitality industry, with 72 per cent of businesses in favour of setting up the proposed ERTBID.

Mrs Colley also added: “I encourage everyone to read the business plan and if you have any problems with it then pick up the phone and let us know.”

The result of the ballot will be announced on July 1.