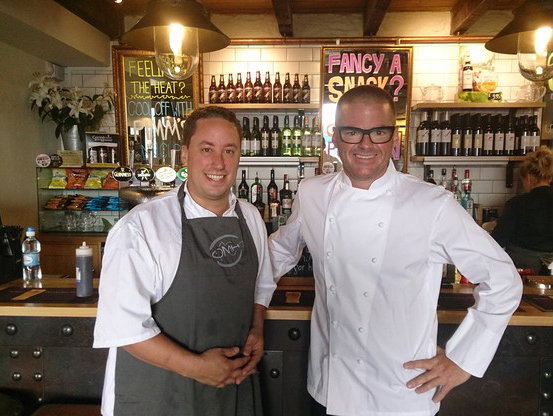 Brixham  featured in the first episode of chef Heston Blumenthal’s new television series Great British Food, which focused on fish and chips. In the hour-long programme, Heston discovered how the industrial age fuelled the proliferation of chip shops by allowing fish to be transported quickly inland by train.

Most of the filming, which was done over two days earlier this year, took place on board the replica of the historic Golden Hind, which was transformed into a fish and chips shop.

The crew used the kitchen of the nearby Old Market House to prepare the food. The restaurant’s general manager Rhys Heavens said: “On the day of filming, Heston’s crew of chefs arrived to start their preparation at 6am. They began to construct a very large edible fish eye using a transparent jelly, saffron strands for the veins and gold leaf to create a shimmering effect. They also sprayed a spongy food product of some kind into hot oil from a gas charged canister which made a coral-type appearance.

“The items also included two-foot long chips which were put into a giant cone with newspaper print to represent a chip shop. The chefs were very good on the day and clearly had a lot of skill in the kitchen. They always had time to show me what they were doing and even suggested some special dishes we could use at the Old Market House.”

Keith Williams, vice-chairman of Brixham Chamber of Commerce, said the programme would be good for Brixham. He said: “It will put Brixham in the spotlight which is good for tourism. Hopefully it will bring people to the town in the same way as Fish Town did.”