THE CHAMBER OF TRADE AND COMMERCE 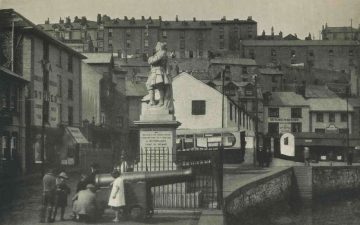 On Monday, 26th November, 1923, a meeting of between 50 and 60 Brixham tradesmen was convened at the Bolton Hotel by Lawrence Rudd Mollon, assessor and collector of income tax. The meeting was addressed by Messrs. P.H.W.Almy, and A. J.Mountstephen, vicechairmen of the Torquay Chamber of Trade and Commerce after which it was agreed that a Chamber should be founded for Brixham and District. The proposer was H. M. Smardon and the seconder W.E.Raymont. Forty three of those present promised to join and a temporary committee was appointed.

The second meeting took place on 13th December and after being addressed by F.W. Pratt, Chairman, and W. E. Thomas, secretary of the Torquay Chamber, the committee submitted draft rules which, after amendments , were adopted. Sir Alfred Lassam Goodson was invited to be president with a committee of 17. At the close of this meeting membership stood at 70. The new committee met on 17th December and appointed Mallon secretary at £12 per annum.

(a) the enforcement of a uniform closing time,

(c) boosting Brixham as a holiday resort, especially for sea angling and

(d) the abolition of long waits at Churston Station.

At the next meeting the matter of ‘closing time’ was adjourned, being eventually dealt with by parliamentary legislation – the railway question was also deferred. Support for the Chamber’s publicity campaign on behalf of Brixham came from both the Urban District Council and the Great Western Railway. It became possible to produce fresh posters every year to advertise the Town on the railway and in 1925 the Chairman attended a conference with Sir Felix Pole who was visiting the Torquay Chamber of Trade & Commerce.

The register of apartments in Brixham was quickly compiled and 300 copies distributed in April. It was also announced that the Brixham Chamber had been affiliated to the National body – by the end of the first year the membership had increased to 98.

At the request of other Chambers of Trade and Commerce, Torquay convened a meeting in February 1925 at which it was resolved to form a South Devon Federation to comprise the Chambers at Brixham , Paignton, Dawlish, Totnes, Newton Abbot, Torquay and Teignmouth with the Dartmouth Commercial Association.

The first Chairman, Captain John Raymond Peek, was succeeded by Cyril Hoskins, manager of Messrs.Holman, Ham and Co. Under their aegis, the Chamber took a great interest in all matters appertaining to the Town and was of great assistance to the Council .

One of the most important activities of the Chamber on behalf of publicity was the organisation by L.R.Mollon of Brixham’s first Carnival in July 1925 which coincided with the visit to the Bay of the 7th Flotilla Squadron. Dances, concerts and other entertainments were organised by the Chamber, the Carnival itself taking place at the end of the week on Saturday, 18th July.