How grandma’s passion became my life

The first time I met Sandy was at Brixham Sewing Box, her treasure trove of creative sewing just by the harbour on Middle Street. It’s a rare treat for lovers of needlework, knitting, lacemaking, patchwork, embroidery and all kinds of creative craft. I adore the elegant collection of fabrics, the sparkly threads, the myriad of accoutrements for the keen sewer such as beautifu1 buttons, colourful wools, pure cotton and all kinds of fastenings.

This evening, not to be distracted by the bustle of the shop with Sandy greeting her regulars and hearing tales their latest creative successes, I am popping round to her house for a proper chat. I meet Sandy’s warm and husband Nick who is disabled after a serious diving accident long ago, whilst they were engaged. They subsequently married in 1984 and whilst Nick takes a interest in the business and is hugely supportive, it’s much Sandy’s domain.

I was interested in why a long-standing police officer loved her job and spent her last few years in the force with the CID, came to be running a popular destination sewing business in the Bay. Sandy explains she was born locally at Shrublands Maternity Unit, Torquay and went to school at Furzeham Primary and Churston Ferrers Grammar. Her Grandmother taught as of Domestic Science at Windmilll School for Girls in Brixham where she taught cookery and sewing, later up to the newly built Brixham Secondary School (now Brixham Community College) where she stayed taught until her retirement. Many of her ex-pupils now come into Sandy’s shop. Her mother also taught at the Church of England Infants then Eden Park before moving to Stoke Fleming Primary School wher she had responsibility for early years.

Sandy has one sister, Carole and together, the family made all their own clothes partly from choice and partly from the need to economise.

She explains, “Grandma was the serious one with her fine needlework and embroidery. She really had all the skills; it was a passion and a love for her, so the sewing machine was always set up and together with lots of family cooking, I grew up immersed in creative, domestic activities.”

At school, Sandy excelled in art and music but her father was firm that he wanted her to take academic subjects. During A-level Economics she learned about the principles of supply and demand. However she didn’t really fancy going to university so eventually dropped out of her A-levels and joined the police. This was a career she loved, where she did well and stayed for 14 years.

She tells me, “After leaving the police, I had time to think and to re-evaluate life.” She went to South Devon College for 4 years to retrain in Beauty and Holistic Therapy. Subjects included holistics, beauty treatments, aromatherapy, massage and electrolysis. This triggered her first entrepreneurial venture and whilst still training, she set up a small business offering beauty treatments from home. Even so, her love of sewing, creativity and her wish to get out and about more, began to blossom so she set up a market table at Scala Hall in Brixham.

At first Sandy was running a single table at Scala Hall just three times per week with a mobile nail bar, doing her clients’ nails and selling nail products. People used to chat to her about the difficulty of buying basic sewing items such as elastic and thread locally and the germ of a business idea evolved.

She realised that there was no haberdashery nearby so she set up a second small table offering sewing items alongside her prospering nail bar. These two market tables at the Scala Hall quickly became 5 x 6-foot tables and another market trader was often drafted in to help. With all her diverse stock items, it was taking a full 3-5 hours just to set up her displays and she was still working at home, giving beauty treatments. The market was only open 3 days per week and it was simply taking too long to set up each time, dragging along large wheely bins full of products each time.

It was impressive growth for a small business that had only sold £11.79 in its first week, barely covering the £5 table cost. So why was she so successful I ask Sandy? She reveals, “The most important thing was listening. If 2 or 3 people requested an item, I would then stock it. I simply found out what people wanted and then supplied it. She started selling fabrics offering cut lengths from L.G.Brown’s Textiles (known locally as Brown’s) but people started asking for specific fabrics so she started enquiring where to source these. Sandy, who was keen to offer a good service to her customers, then discovered Makeover, which became her main supplier of beautiful fabrics including cottons, prints and higher quality threads.

Customers were delighted but Sandy now had no choice but to think about logistics. She remembers, “I had to start breaking down early as it took so long to dismantle and put away all my stock. People would pop in and try to purchase items as we were packing up so it all became a bit crazy.” Sandy tried to find a location in town for her rapidly expanding business and agreed to take over premises previously occupied by Twinkletoes (fish pedicures). 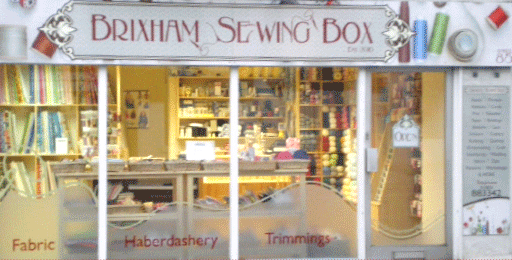 Clients can buy just one button or safety pin at a time and Sandy always has time to help. Some of the most popular items at the end of the year are Christmas fabrics. Festive sewers are busy creating cushions, table runners, skirts, dresses, tablecloths and napkins. Many customers like to make their own advent calendars and these homemade items often become family heirlooms, being brought out year after year to the delight of the whole family.

Sandy is often online late at night looking for beautiful, practical and unusual items from as far afield as France and Japan, rarely available in the Bay. Card makers are an important part of her clientele and the yachting fraternity regularly pops in for fabric destined for curtains and bags.

More recently she has been stocking deckchair stripes and heavier weights for upholstery, also popular with yachties. Wedding planners often pop in for ribbons and lace.

After lots of requests for sewing courses, Sandy rented the premises next door to Brixham Sewing Box for this purpose but the new space quickly became too small so she now uses local venues. Dressmaking courses usually sell out quickly and other popular courses she now runs include patchwork & quilting, crafts, lacemaking, drawn threadwork, knitting and spinning. Her courses are fun and friendly, usually including a sociable 2-course lunch with a glass of wine. At the moment courses are being held at Brixham Yacht Club with lunches at Rockfish Brixham it makes for a delightful and practical, full day experience that appeals to all ages.

Sandy really has her heart in what she is doing; Brixham Sewing Box is very much her brainchild and she cares deeply about how it does in the future. She explains, ‘I just love to be part of my community and I so much want to leave a legacy, a positive and worthwhile contribution to be remembered by.’

Sandy is always bubbling over with new ideas and at the moment she is considering offering a printed catalogue for her customers to browse in their homes. Both her husband and her sister have expressed their willingness to process the orders and man the sales and advice line but this is a project very much at the planning stage at me moment.

Her life is not all about work though. Sandy set up Paignton Ladies Hockey Club in 1992 (now Torbay Ladies). Although she has had to step away in recent years due to the demands of her business, she is immensely  proud of what she, together with her friend, Tracy Wolff, managed to achieve. Sandy became umpire coach, went all the way to national level, travelled to Europe and also coached Torbay Men’s Hockey Club. She also loves skiing and is planning to travel to Italy with a group of hockey friends to hit the pistes this year.

Even though her husband Nick’s mobility is very restricted by his severe neck injury, they manage to do a lot together. They enjoy old-fashioned picnics and visits. ‘They’ve seen Jools Holland, Chris Rea and George Michael together, have been to Formula One Racing and even took a helicopter ride one year. Sandy laughs and says, “I could spend a whole evening telling you the funny things that have happened to us over the years. We just deal with Nick’s injury. We’re not really special because of it.”

Well they certainly seem pretty special to me and this looks like a super-creative family business that will go from strength to strength.