In memory of Jackie Robinson 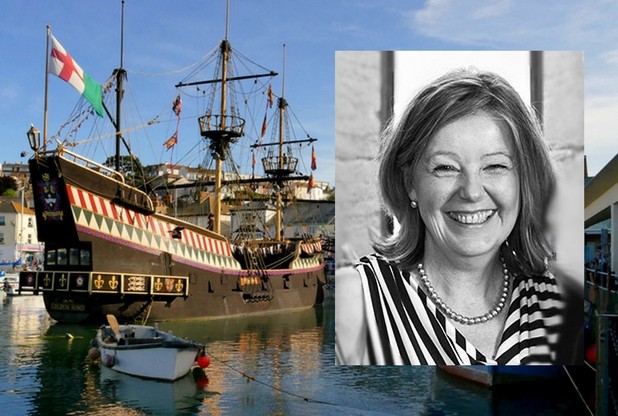 Chamber member Jackie Robinson, co-owner of the Golden Hind museum ship in Brixham, has died aged 56, having been diagnosed with a head tumour in the Autumn. Her husband, Neil Worrell, said she died peacefully at home.

Jacqui Shaw, Chair of Brixham Chamber, said ‘Jackie was so vibrant, such a joy to have a conversation with and my word, what an impact Jackie and Neil have made in our town. The Golden Hind looks wonderful and vibrant, the work and effort put into the ship is much appreciated by Brixham Chamber. Jackie may no longer be with us physically but her heart, her passion and her legacy in our town will live on and so will our gratitude for what they as a couple have achieved for the premier visitor attraction in Brixham’.

Jackie and Neil moved to Brixham in 2013 after restoring the dilapidated St Peters Church, which was built in 1874. The project featured on the television programme The Restoration Man. Following the successful restoration, the couple turned their attention to the Golden Hind replica ship in the inner harbour. In 2015 they started operating and updating the attraction with their new ideas.

Jackie’s first taste of business was helping out in a local sweet and tobacco shop at the age of 15. From there she moved to the South of France where she worked as a holiday campsite manager. She spent five happy years there, based near Nice, before moving back to the UK at the age of 24. In London she joined First Choice Holidays which later became TUI Travel. Jackie had found her vocation and during a 30-year career rose to become HR director in charge of 30,000 people. Neil said: “She was a star in terms of business skills. I hesitate to use the word genius, but I would use it about Jackie.”

Jackie was a down-to-earth Yorkshire girl. She didn’t crave fancy shoes or effects and got most pleasure from organising family events and holidays. She loved going to new places and meeting new people and her corporate work took her to the US and Russia.

She met Neil, an architect, in 2009, and shortly afterwards they both left corporate life to set up their own businesses – Jackie’s specialising in HR and PR, and Neil’s in hotel planning. Jackie soon admitted that she found it dull and as a result she often pitched in helping Neil with his various projects in the UK, around Europe and beyond. It was then that the couple talked about ‘doing a building project’. They found the old church in Brixham and Neil said to Jackie: “You always wanted to live by the seaside. This is perfect – well apart from the fact that it’s a total wreck.”

They bought it and started work on the major restoration in March 2012. They thought it would be good to have a record of the build and Jackie got in touch with Channel Four. As a result, on day one of the build, the presenter of the Restoration Man programme, George Clarke, and his camera crew met them to record every step of the journey. The church was deconsecrated in 1977 having served the community for more than 100 years. The lower part of it was converted into three flats in the 1980s, including the rear half of the nave plus the original church main entrance. The upper part of the nave, the vicar’s entrance and the chancel is the part which the couple restored. Fifteen months and thousands of hours of ‘sheer hell’ building work later, it was finished. Jackie and Neil were delighted to see a beautiful result emerge from the raw ‘chrysalis’ of the dilapidated shell, and also happy to discover the history of the church. The programme aired early in 2014. Jackie always said ‘the church wrapped its warm arms around us’.

Everybody that met Jackie was struck by her approachability, vivaciousness and warmth. Jackie was confident in her own abilities and strengths – but without any arrogance. But those that met Jackie soon learned that anything she did, or they did for her, would be done properly, or not at all. Neil called her ‘the perfect role model for women’. For example, she never felt the need to prove anything to anybody, due to her natural stature and capability. Jackie would never complain about her situation if she found herself in a pickle – she would simply knuckle down and show everybody that her abilities were well up to any challenge.

The family was thankful that Jackie had stepped back in 2009 and found a vibrant new life in Brixham and had at least some years to enjoy her new life by the wonderful seaside in Devon. Jackie was blessed with a superb logical mind, and would commonly leave solicitors, and even barristers, trailing in her wake. Neil said: “She would have made a great lawyer but the profession was one of the few things that really made her see ‘red’, so it was probably better that she didn’t go down that route.” Jackie’s tough drive and determination was deeply ingrained, and her success anything but a matter of luck. Contrasting with this, Jackie’s warmth shone out strongly. Neil described her as ‘having balls of steel, but a heart of pure gold’.

On the Golden Hind, Jackie quickly mastered the many challenges that the ship presented including marketing initiatives, new activities and exhibits, and coordinating dozens of school visits annually enjoying learning about the history of Drake’s voyage. She improved the presentation of the entire business as well as the guest experience, including inventing ‘Sid the Skeleton’, the ship’s mascot.

Jackie coordinated the many and varied scheduling, purchasing and financial decisions that were needed daily to ensure a smooth operation. She was also instrumental in creating the enhanced ship visual identity, marketing strategy, website content and understanding and delivering a first class visitor and brand experience, whether a visitor was five or 50 years old. Indeed, Jackie saw an initial challenge as ensuring that adults enjoyed the ship as much as the scores of young ‘pirates’ clearly did. She achieved this by emphasising the factual story of the amazing circumnavigation that Drake undertook, three years at sea, the first Captain and Englishman to go around the globe, and of course the money, bringing back over £480million at today’s value.

Jackie loved living in Brixham and contributing to its ever increasing success and growth, a role that she took seriously, and she would always make a practical contribution, getting her hands dirty, adding plants and flowers or simply picking rubbish up or sweeping the roads. She was always keen to work for the benefit of Brixham and to be as generous as she could to visitors and residents.

The television company behind The Restoration Man filmed a ‘revisit’ to see Jackie and Neil early last year and record what they had been up to, which included filming on the ship. Sadly, Jackie never got to see the finished programme, but the family asked Channel Four to proceed with the broadcast as a tribute to Jackie with no mention of her condition. The programme will be shown later this month and will show Jackie’s spirit, skills, achievements and ideas for the future.

The crew of the Golden Hind have been working hard to maintain and improve the ship during the winter, ready for the re-opening during half term week, and are looking forward to welcoming visitors back onboard on Saturday, February 11. The whole crew and Jackie’s family are enormously proud of her achievements and will work hard in 2017 to continue the build on the success of one of Brixham’s iconic landmarks and attractions.

Neil said: “The ship crew and I will continue to improve and enhance the ship for the future. It has now been in Brixham for over 50 years, and continues to give visitors of all ages a wonderful insight into life aboard Sir Francis Drake’s famous Tudor galleon. We are devastated to lose Jackie but we are determined to continue her success on the Golden Hind going forwards. She was, and is, an inspiration to us all.”

A church remembrance service to celebrate Jackie’s life will be held at noon on Friday, May 5, in All Saints Church, Brixham.