Is it curtains for Brixham Theatre? 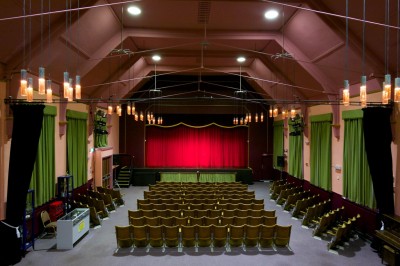 The future of Brixham Theatre is hanging in the balance after the society that runs the much-loved venue decided to bring the curtain down on its work there.

Brixham Arts and Theatre Society (BATS) has given notice to Brixham Town Council that it is handing back the lease on the theatre with effect from April 30 next year, blaming a ‘perfect storm’ of factors working against the theatre’s viability and future development. Until then, there is a full programme of professional and amateur shows that BATS is urging audiences to make the most of the opportunity to see.

BATS was formed in 2007 and ran Brixham Theatre on behalf of Torbay Council until the building was handed over to Brixham Town Council. In 2013, the town council awarded BATS a 15-year lease with a right to renew.

BATS director Cecilia Kean said: “It is with great sadness that the BATS board, after much consultation with the members, has decided to call it a day at Brixham Theatre.

“BATS took on a much neglected, run-down theatre that was only staging three or so shows a year. We have completely turned that situation around, not only redecorating the broken-down dressing rooms and auditorium but also bringing the theatre up-to-date and safety compliant, with the BATS volunteers operating a professional theatre system.

“The theatre now presents top quality professional shows and performers, as well as many community events, and established two youth theatre groups, a folk club and an open-mic night all operating regularly at the theatre. Star performers of all genres, from Paul Daniels and Debbie McGhee to Germaine Greer and Gardener’s Question Time have featured, demonstrating BATS’s commitment to bringing the highest standards to Brixham Theatre and luring back audiences who had abandoned it.

“However, BATS has been faced with ‘the perfect storm’, resulting in the board deciding that to continue operating Brixham Theatre is impossible, as the theatre is not viable as an independent performance space, despite being a voluntary run organisation.”

The reasons for the board’s decision include: low numbers of ‘bums on seats’; lack of advance ticket sales leading to shows being cancelled by performers and agents as they cannot take a risk that an audience ‘may turn up on the night’, for example the Comedy Grove Night on May 20 sold only four tickets by a week in advance, resulting in cancellation by the agent; lack of ticket sales leading to local amateur companies being risk averse to bringing their shows ‘on tour’ to Brixham; local amateur companies struggling to cast shows or being unable to afford to venture outside their own spaces, leading to a reduction in hiring income; and local groups being unable to afford to hire the theatre despite heavy discounts and subsidies for youth theatre groups and regular users.

The board also blames increased overhead costs, fewer volunteers prepared to commit their time or having the skills required for key roles, lack of capital grants for the improvement of the theatre, Torbay Council for changing the Central car park’s overnight timing and pricing structure, and Brixham Town Council for changes to the space within the building that it can use, meaning ‘the overheads for the theatre are rising far beyond the hiring abilities to cover them’.

Ms Kean added: “This decision is not one that has been taken lightly. Many of us are the founding members from 10 years ago and have demonstrated a long standing commitment to trying to make Brixham Theatre thrive and be viable. We have striven hard, with many, many thousands of hours in volunteer time, definitely some blood and sweat, and sometimes even tears, to turn the theatre around. There have been many highs and some lows over the years. We trust that the people of Brixham will feel that we have done a good job.

“However the time has come to face facts and be realistic about the future of the theatre and BATS. We will leave with our heads held high and the history of the theatre marking a time of growth and splendour.”

Brixham Town Council said it was thankful for all the hard work that BATS has done over the years, including updating the sound and light equipment, redecorating the auditorium and ‘rejuvenating an under-used asset in the Town Hall’.

Cllr Steve Clutterbuck, chairman of the Town Hall Sub-Committee, said: “This is the end of an era with BATS but also an exciting opportunity in the next chapter of the theatre.”

The council is keen to embrace this as ‘an opportunity for members of the community to work in collaboration and to continue to ensure the future viability of a much-loved jewel and asset in the town’.

Community groups are being asked to write to the town clerk by noon on Friday, October 27, with their proposals on how they plan to run a sustainable theatre. Those interested should be mindful of the following criteria: partnership working with the council on the regeneration of the Town Hall complex; work in collaboration with the council for a community theatre/facility in an open and transparent manner; work in unison/partnership with other tenants and hirers of the Town Hall as well as members of the wider community; contribute financially to the sustainability of the Town Hall.

The council said this provides ‘a wonderful opportunity for keen thespians to take forward and enhance the foundations laid by BATS while offering possible new arts related initiatives’.

The council added that it is ‘confident of a successful outcome’ and closing the theatre would only be ‘a last resort’.

Creative Marketing People
…three words that describe us and what we do.

Based in Brixham, we have broad experience, wide ranging skills and an extensive network.

Creative Marketing People
…three words that describe us and what we do.

Based in Brixham, we have broad experience, wide ranging skills and an extensive network.