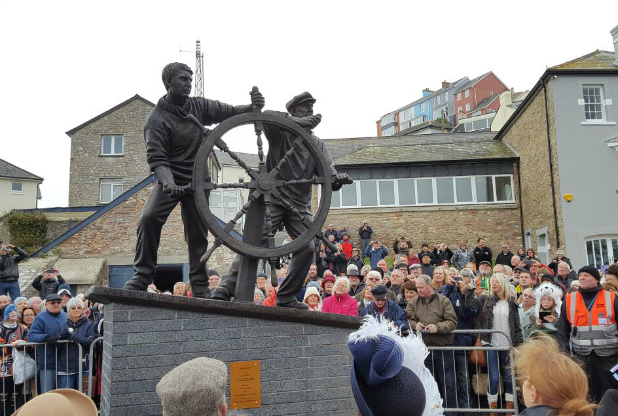 A bronze statue to commemorate lives lost at sea and celebrate Brixham’s fishing heritage was  unveiled in the port at the end of November. As a contributor to the funding for the statue, members of Brixham Chamber were delighted to be invited to the ceremony.

The life-size Man and Boy stands on King’s Quay, nine years after Fishermen in Sculptural Heritage was formed with the aim of creating the figure. The statue, which was created in clay by local sculptress Elisabeth Hadley before being sent to Shropshire to be cast in bronze, can seen from the inner harbour and from returning vessels for centuries to come, and it will offer local families who have lost or buried loved ones at sea a special place to reflect and remember.

FISH chairman Miriam Pymm described the unveiling as an ‘amazing day’ for the port. “The statue just looks so right,” she said. “It already looks like it has been there for 50 years which it should have been. It’s in just the right place. We always thought that having it next the bench on King’s Quay means that people can sit and reflect about their loved ones. There will also be plaques on the wall in the future to remember the fishermen and this is the perfect thing to go with it. It was an amazing day and so pleasing to see between 300-400 people turn out to witness this statue being unveiled.”

Brixham Town councillor Mike Morey, who helped unveil the statue on Saturday afternoon, said: “Nine years of funding with the help of the community has made this possible. Without them this never would have happened. This is their statue and it belongs to the people. It commemorates both the lives of people who have been lost at sea and the old fishermen who are no longer with us. It is a brilliant day for Brixham and the turnout down on the Quay was massive. Going from the initial concept to be standing here today has been a huge journey but it is a great thing for the town.”

Original story by P. Ellis in the Herald Express
Photo by Caroline Abbott
Reproduced by kind permission of author/publisher