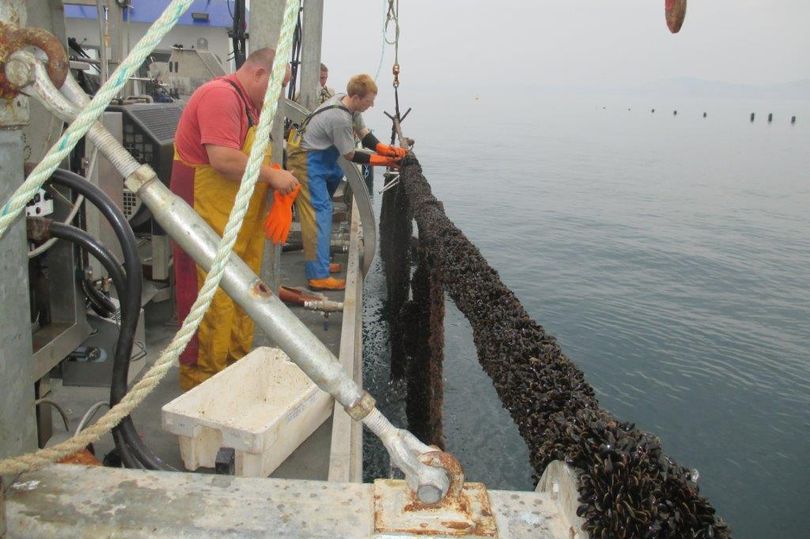 Offshore Shellfish Ltd, operating out of Oxen Cove in Brixham, wants to increase the size of its vast farm, six miles offshore in Lyme Bay, to use all of the lease space of 1,540 hectares – about the size of the entire site of Heathrow Airport.

The plan is to tap into the European market – selling into main processors in Holland who supply 100,000 tonnes a year to France and Belgium. It will mean the family-run business, owned by John and Nicki Holmyard, would become one of the largest employers in Brixham, creating around 70 jobs and generating millions of pounds for the Bay economy.

To become a commercial enterprise, it needs access to its own jetty and running water processing and storage facility to handle around 10,000 tonnes of mussels every year with sales reaching £15million. It could mean the recruitment of an additional 20 sea crew and a further 50 in admin and onshore processing.

Now, the Torbay Development Agency is seeking funding to press ahead with plans to allow Oxen Cove to be used by the marine industry after the idea was agreed in principle by Torbay Council’s harbour committee. The move will pave the way to create a ‘shellfish village’ with the hope of attracting similar businesses to the site. The hope is for the Holmyards to lease the building from the authority and invest around £1.5million in kitting it out ready for production by September 2019. But it will mean relocating much needed car parking sites at Freshwater Quay and Oxen Cove.

The couple, who pioneered mussel farming in Scotland, said an increase in production is vital. It will increase the total UK production by 40% and enable the company to reach new markets. Mrs Holmyard said: “The initial aim is to supply one tonne bags of mussels to Europe and to extend the UK market by selling processed value added products.”

The UK market is the lowest in Europe with each person eating just 140g of mussels a year, compared to 5kg in Belgium. Mrs Holmyard said: “We need to work on that and the market is growing. A lot of people are put off by the shells and they think that preparing them is a hassle or they don’t know what to do but there are ways to sell them ready prepared, for the tapas market, for example.”

The Holmyards were among a co-operative of shellfish producers who developed the boil-in-a-bag pouches for mussels now sold in all major supermarkets. “You have to take out the need for preparation to reach new customers,” she said. The secondary preparation would be undertaken at premises at White Rock, in Churston, rather than on the quayside. Part of the plans are to create a visitor centre to host school and tourist visits about how mussels are farmed.

She explained how some of the farm equipment has been imported from New Zealand where the industry is well established. It is also set to take delivery of a second boat alongside its harvesting vessel, Alysee. At capacity, the farm will be one of the largest in the world and is pioneering methods never before used in the UK.

For 25 years, the Holmyards farmed at Loch Etive Argyll on the West Coast of Scotland before starting on this latest venture around 10 years ago. Mrs Holmyard explained: “John always wanted to do the big project. Offshore in Scotland is very wild and we needed somewhere that had good water quality and was not already a prime fishing ground.”

Ropes are put out in April or May to catch the spat before the seeds – or young mussels – are distributed onto new ropes with space left to grow before being harvested within a year. No chemicals or additional processes are needed, with the mussels taking all the nutrients they need from the sea.

A recent study undertaken by a PhD student at the University of Plymouth has shown that the farm hosts a diverse range of species, including brown crab and scallops and so far there has been no harmful build up of waste below the ropes that would damage the sea floor. Mrs Holmyard said: “A survey found more than 60 different marine creatures are living on our ropes, which shows how biodiverse the area is.

Mr Holmyard has designed and built the farm based on the New Zealand industry methods, and from other regions of the world where offshore techniques are being developed. Havelock, a small town on the Marlborough Sands in New Zealand has been transformed in recent years by the growth in the mussel industry. She said: “Much of the country’s mussel production is now processed there with the vast majority going for export.

“There are farm and factory tours and festivals with a real sense of pride in what they are doing. We could do a very similar thing to make Brixham the shellfish capital of the UK.”