Open letter re Windy Corner and reply from Torbay Council 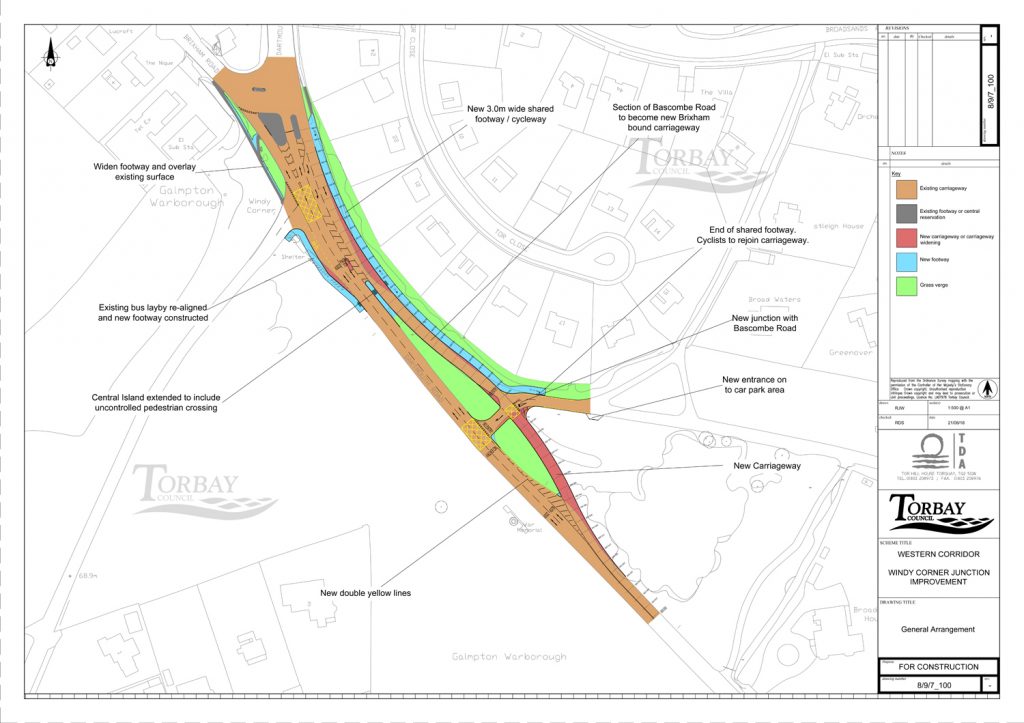 In regard to your recent announcement about the planned work at Windy Corner, we are pleased to see that the much needed upgrade to this junction is going ahead.  However we do feel that, on behalf of our members, we need to pass on some very valid concerns that we have regarding the scheme, as follows.

1. You state that the work at Windy Corner and the work near Sainsburys in Paignton, will be finished before the main summer period.  Considering the current progress and the amount still to do at the Paignton roadworks this seems very optimistic at best.  The considerable overrun at Paignton gives us no confidence that the planned work at windy corner will be completed on time and so there is a very real risk that this will impact on the summer season.  If this happens this will have a significant impact on the businesses in Brixham.

2.  The tourist season actually starts around Easter and so the traffic generally increases from then on.  There is a real concern that with both sets of roadworks happening at the same time the disruption during this very important part of the season could be significant.  It has been noted that when there were temporary traffic lights at windy corner recently the queue stretched back to Paignton green!

A significant number of businesses based in Brixham need to travel in and out of Brixham to see their customers or for meetings.  They are worried that with both roadworks happening at the same time the journey times in and out of Brixham will be increased and they will be able to do less business in a day.  This will have a real impact on the income of those businesses.

3.  Finally, while we are in no doubt that extending the two lane section up to Windy Corner will improve traffic flow, this seems a very expensive way of doing it.  I was under the impression that it had to be done this way to avoid taking any land from Churston common, however it appears from the plans that you are going to put a cycle path through the common anyway.  Wouldn’t simply widening the road have been cheaper and less disruptive?  There is also a concern that while the plan will improve the traffic flow the improvement may not be enough to cope with the ever increasing traffic volume.

We would be grateful if you could respond as follows:

1. Please can you advise us of the rationale behind starting the roadworks at a time of year that will impact on the start of the tourism season and runs the risk of impacting on the main summer season if there is any overrun.  Would September be a better option, and is there any way to delay the works until then?

2.  Can you advise on the results of any impact analysis that has been carried out incorporating the fact that both roadworks will be happening at the same time, so that we have an idea of the likely delays.

4.  Please will you advise how the roadworks will be managed while work is being carried out in order to keep the traffic flowing as normally as possible.

5.  Can you also advise, based upon your planning, how long these improvements are going to improve traffic flow for before any improvement is cancelled out by predicted increases in traffic.  Considering the fact that these proposals were first produced 10 years ago.

I would hope that the answers to these queries are in your planning document and so should not be that difficult to obtain.  We can then pass the responses onto our members to hopefully alleviate their fears.

As the roadwork’s are planned in the very near future we look forward to your speedy response.

I refer to your email of 3rd March 2019 in respect of your concerns around the above scheme, which is due to commence shortly.

1. The rationale for commencing this scheme in March is really based around the availability of contractors, including those carrying out the required diversionary works for Public Utilities. We originally hoped to commence in late January/early February, however some utility companies were unable to agree a suitable start date to accommodate this.

We would not commence these works if completion before the Summer period could not be programmed, however we were also aware that the appointed contractor could not commit to an autumn start in this case. Any decision to delay the works would therefore have resulted in commencing the planning and procurement process again with a likely start not expected until early 2020.

The successful Contractor has now produced a programme showing expected completion at the end of June 2019 and it has been decided to proceed on that basis.

Unfortunately, despite many months of planning, issues such as Public Utility Works are  not always completely within our control and this often dictates our programming of major schemes.

2. The Impact analysis of this scheme being carried out at the same time as the Brixham Road Improvement was also a consideration in point 1 above. The phasing of the Windy Corner Works demonstrates that the majority of the scheme can be carried out by maintaining two way traffic through the junction, with more disruptive surfacing works being restricted to evening/nighttime working. It is not therefore anticipated that traffic congestion will be significant through these works and with respect to Brixham Road, traffic flow is expected to improve on the levels currently experienced, as the scheme moves into the latter stages from April onwards.

Clearly with works of this nature we can never give any guarantees that there will be no disruptive effect of the two schemes, however the impact is expected to be kept to a minimum and there are clearly advantages in having both of these improvements in place for the forthcoming Summer.

3. The planned completion date for Windy Corner is the end of June 2019 and the expected completion date for Brixham Road is early July 2019. I am aware that there is concern over the timescale for the Brixham Road Works and we have always maintained that this was by far the most technically challenging section of the series of Western Corridor Improvements to construct. Please be assured that our engineers are working closely with the contractor to overcome any issues that occur during the scheme. The site is however very restricted in terms of working space and this hampers opportunities to efficiently increase any resources on site at the present time.

The Windy Corner scheme is a considerably smaller scheme with less technical issues and as such the completion within the proposed timescale should be achievable.

4. Draft details of the traffic management for Windy Corner is available on our Website on the link below under the ‘Windy Corner’ tab. These dates are always subject to change as the scheme progresses, however the phasing demonstrates the intention to maintain two way traffic flow as much as is reasonably possible. https://www.torbay.gov.uk/council/policies/transport/local-transport-board/western-corridor/

5. With respect to the question of the life span of the junction, you are correct in the fact that the design is already 10 years old and realistically further capacity is likely to be required within a further 10 year period. I anticipate that a further upgrade will form part of options considered for proposals for the next Local Transport Plan, however this is likely to be a much larger and more challenging scheme, which is likely to focus on increased capacity to the signalised junction. As part of our considerations for the current improvement scheme, we have concluded that the works proposed for this year will not be abortive works in this respect  and will actually compliment any future upgrade of the signalised junction, whilst providing significant improvements to traffic flow in the short term.

I hope the above information has provided some assistance and we will endeavour to update our website as the scheme progresses. Whilst there is always the possibility of some disruption due to these works, I hope that the information provided shows that we intend to minimise these occasions.