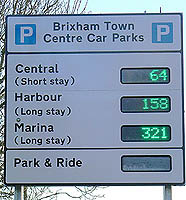 Motorists using any of Torbay’s 37 award winning council-run car parks will soon pay a single fee of just £2 for all-day parking. The new parking deal is being launched on Friday 1 November, with several free parking offers also scheduled in the run up to Christmas.

The £2 ticket will allow motorists to park all day, and as it is transferable motorists will, if they wish, be able to travel elsewhere in the Bay and use it in other council car parks. On-street parking charges will stay the same, so people who only want to park for a short time will be able to buy a lower priced ticket from pay and display ticket machines. The new deal will operate initially for a four-month trial period, and will be extended if it proves popular.

Cllr Robert Excell, whose Executive Lead portfolio includes parking, said: “During the last year or so we have reviewed very carefully our parking policy. Part of this work has involved consultation with, and feedback from, our local residents and business community.

“We recognise that we need to introduce incentives that will benefit residents, visitors and traders, and we believe the £2 ticket deal is well worth putting to the test. We will monitor it carefully, seeking the views of traders and the motoring public, before deciding whether to keep it going or revert to a sliding scale of charges.

“At the moment, an all-day ticket in most car parks costs £8, so the new charge obviously means a big £6 saving. We believe commuters will find this offer a particularly attractive one. Of course, there will be some people who may only need to park for a comparatively short time, so they will find that on-street parking will suit them more. The £2 deal also has another significant benefit. It takes away the worry of having to get back to your car before your ticket expires, so you no longer run the risk of returning to find you’ve been issued with a penalty charge notice.

“Torbay Council has received national recognition for its work relating to parking. Our parking services annual report was judged the winner out of 29 entries that were submitted, and Torbay was highlighted at a Transport Select Committee hearing on parking enforcement as a good example of how some councils are introducing various initiatives to bring people into town centres. This deal is just the latest in a line of such initiatives, another one being the recent introduction of a £50 annual off-peak parking permit, several hundred of which have already been bought by residents.”

A pay on exit system operates at Torquay’s Terrace car park, and a similar service is being introduced in the town’s Lower Union Lane car park.

The £2 ticket will also apply in those two car parks, where motorists will be able to press a button at the pay station to get a receipt if they want to use their ticket elsewhere during the day by using that receipt like a pay and display ticket.

The 37 car parks where the £2 deal will operate all have national Park Mark awards in recognition of the quality and level of lighting, signage, cleanliness, surveillance and management practices.

Other parking offers in the run up to Christmas will operate as follows: