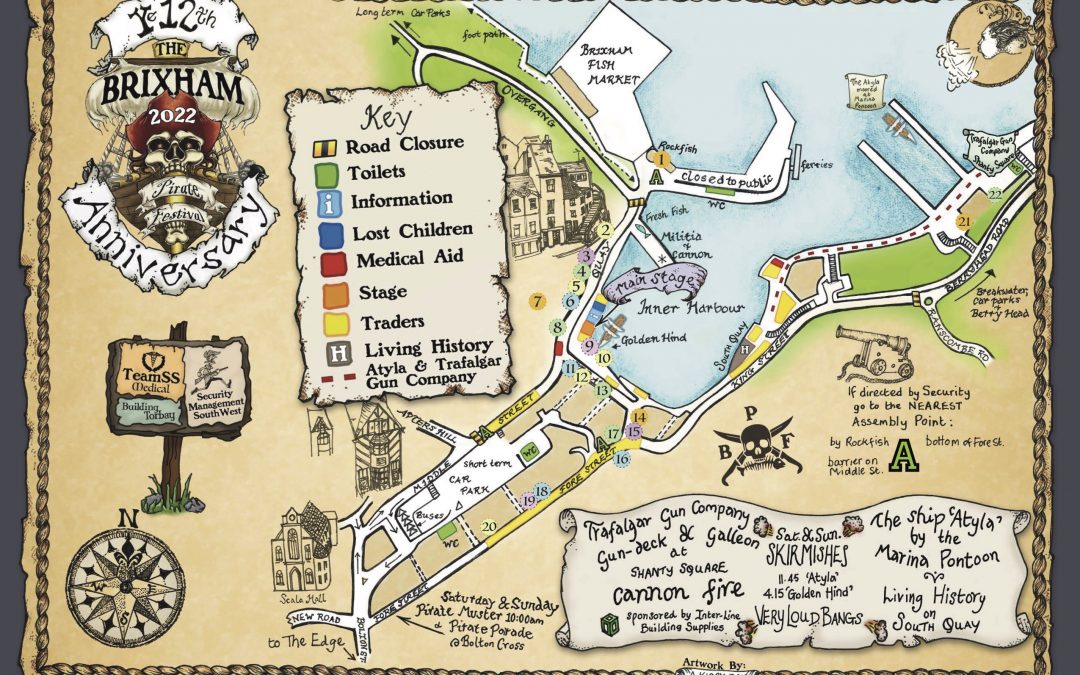 Brixham Chamber is once again proud to sponsor the Brixham Pirate Festival which returns this year after a two-year Covid absence. Napoleonic artillery, skirmishes in the rigging of a tall ship and rollicking pirate punk music will be on the cards as the town celebrates again.

The port’s much-loved Pirate Festival was sunk in 2020 and 2021 by Covid-19, but the three-day extravaganza is returning for 2022 in some style.

“We’re all very excited to be back,” said festival committee spokesman Alison Kirby. “It has been a long time.”

The pirate festival is one of the traditional curtain-raisers to the Torbay summer events season, and this year’s festival will run from April 30 to May 2.

Its confirmed return is a boost for the tourist trade, along with confirmation that the English Riviera Airshow will return – again for the first time since 2019 – over the Queen’s Jubilee Bank Holiday weekend at the beginning of June.

NHS doctors and nurses will be the honoured guests at the official opening of the pirate festival, walking through town at the head of the parade in recognition of their work during the Covid pandemic and their role in saving the life of Pirate Festival chairman Peter Beresford.

Star of the show over the weekend will be the tall ship Atyla, arriving from her home port of Bilbao in Spain.

A wooden-hulled training ship built in the 1980s, her crew will have spent the voyage learning the skills of tall ship sailing and how to live on board with others.

She will be moored at the event pontoon in Brixham, and visitors will be able to go aboard and learn all about the mission and work of the Atyla Ship Foundation.

Also taking part in the festival are the Trafalgar Gun Company, who offer a taste of what it would have been like to be in a 19th Century naval battle.

Wearing authentic uniforms, they will use reproduction gun-decks, guns on carriers, and artillery to fire salvos over the harbour.

They will also bring a small galleon for skirmishes with the Atyla.

Live music through the event will come from acts including The Dolmen, Black Friday, Fury, Captains Beard, The Boarding Crew, Seas of Mirth, The Filthy Spectacula, Gurdy Bird, Jolly Roger, The O’Marleys and Reivers’ Gallows.