From Qatar to the Quayside 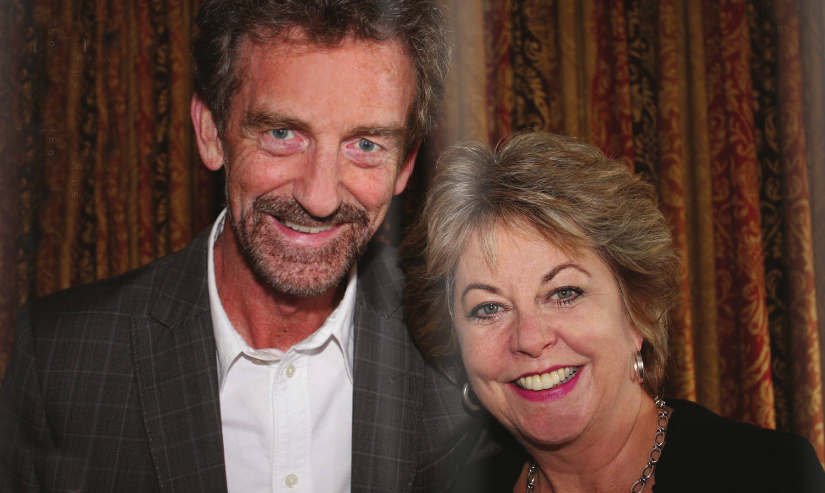 Chamber members Bridget and Chris Bowring of the Quayside Hotel worked in Qatar, Brunei, Korea and London before discovering our quaint harbour town of Brixham 17 years ago. Anita Newcombe finds out more.

I am meeting Bridget and Chris at the Quayside, the hotel they have owned and run in Brixham for 17 years. The striking, pink painted hotel, once a row of fisherman’s cottages, is perched jauntily on King Street surveying the harbour, always a hive of activity with boats galore.

When I arrive at the Quayside, I settle into the pretty hotel lounge for a cup of tea with Bridget. The first thing I want to know is what possessed the two of them to move to Brixham and buy a hotel. The couple had been long­ time expats in some truly far-flung places, Chris working for Shell and Bridget teaching in the local British Schools

They had only returned to the UK for the schooling of their three children Zoe, Penny and Paul and had settled in London. Bridget explains, “Till we came back to London it was like being in the diplomatic service with a new posting every 4 years.”

However, although now based in London for Shell, Chris found himself being sent on a weekly basis to places like South America, Ethiopia and Sierra Leone.The couple’s work/life balance was getting worse and something had to give. Bridget tells me emphatically, “It was Chris’s idea to buy a hotel.”

At this point Chris arrives and he agrees that he came up with the plan. I ask him what triggered his idea and if he knew Brixham or had any experience of running a hotel at all. He replies, “Neither of us had ever been to Brixham before and the only thing I knew about hotels was my many years of staying in every Hilton and Hyatt in every capital of the world.”

However, buying a hotel was now the agreed plan and as an accountant Chris undertook the search for a suitable premises with admirable diligence. Bridget remembers, “I had a vision of a lovely country house hotel, at the end of a very long drive in the heart of the countryside.” However Chris’s methodical spreadsheet, with 50 options duly listed led to the selection of the Quayside Hotel, a well-performing business in a picturesque location with an established manager and some good, long standing staff. Chris said, “All this was terribly important as neither of us knew anything at all about running a hotel.”

First impressions were good. They liked the fact that the Quayside overlooked the harbour – it was pretty and reminded them of the Greek Islands. Bridget says, “You see what appears to be a pile of houses on a hill – to us, it was like a little St Tropez.”

As the hotel was running successfully, Chris and Bridget could turn their attention to planning and the first thing they did was to refurbish the Ernie Lister Bar which was rather run down and not making a proper contribution to the hotel. The bar now serves food and has a regular programme of entertainment including Sunday evening sing-a-longs with a folk group and sea shanties. They have a duo called Southern Comfort which has been playing there for 22 years – in fact the Guinness Book of Records are about to recognise them for longevity.

After renovating the Ernie Lister Bar, Chris and Bridget turned their attention to the restaurant. They redecorated it and improved the food with the objective of obtaining an AA Rosette, which they feel helps tremendously in attracting guests to come and stay. Many visitors in the hotel’s 30 bedrooms stay on a half board basis with dinner included but the restaurant is also popular with local residents.

Bridget says, “For us as newbies to the hotel business it was an easy transition when we first arrived as we had a hotel manager who could also cook plus an excellent chef and a number of ‘old-school’ cleaners who took great pride in their work.”

Chris continues the story, “Over time, the original staff have gradually left and we’ve found them quite difficult to replace. This has led to us becoming more and more involved and we now manage the staff.” Bridget and Chris try to be as ‘hands-off as possible leaving the various heads of departments to manage their own teams. The kitchen, restaurant, bar, housekeeping and reception teams are competently managed on a day-to-day basis. However, the Bowrings meet with them regularly to check standards and to discuss customer reviews on Trip Advisor and Booking.com. They feel strongly that it is very important to nurture their staff, value and develop them and to keep them as long as possible.

Andy Sewell has been the Quayside’s chef for ten years and has been encouraged to become something of a celebrity chef in his own right. He does cookery demonstrations at BrixFest and Fishstock amongst others and often appears in local publications with his recipes and top tips.

The Bowrings are on their third round of refurbishing the bedrooms which each have their own particular style. Chris says, “It’s very much like painting the Forth Bridge, you have to start again as soon as you are finished!”

I wonder if Bridget and Chris feel completely settled in Brixham after 17 years at the Quayside. Chris explains, “For the first five or six years we kept a house in London and went back and forth. Then we decided to buy a hotel in Exeter, The Queen’s Court and ran that for ten years, selling it just before Christmas last year. It was all just too much work. The Quayside is definitely our home now.”

Bridget tells me, “The guests here are very friendly, much more so than in Exeter where we had much more of a business clientele. The Quayside has a very happy feel – it must have a happy history. Even the ghosts that break all our glasses are happy ghosts!”

They’ve had their fair share of exciting guests with film crews staying including Greg Wallace of Masterchef fame and the recent visit of Heston Blumenthal. Blumenthal was filming Heston’s Fantastical Food focusing on ‘dishes that built Britain’ with his Channel
4 crew. Episode One, “Fish & Chips” was filmed in Brixham. Apparently it was a bit like Willy Wonka coming to town -golden tickers were issued and the hotel were lucky enough to get five. These admitted them aboard the Golden Hind, which was turned into a floating fish & chip shop with a wonderful giant animatronic fish.

In spite of all this excitement, the couple do get away quite often for breaks. Their children Penny, Zoe and Paul live in London so they go up regularly to visit them and to see other long-term friends. They also have friends in the South of France and in Poole where they will take short breaks.

Coming back to Brixham is always a pleasure though. Chris tells me, “The best thing about Brixham is the beautiful scenery. We love the fact that it is a working harbour; it’s always busy and never feels like a ghost town, even in the depths of winter.” Bridget agrees, “It’s so small – there is definitely a real community feel here – you know everyone and that’s a nice comfy feeling. The High Street is just like a village.”
Bridget became a founding member of the popular annual festival, BrixFest, although she has just stepped down from that work. She is now supporting Brixham’s Chamber of Commerce as a committee member.

When they have free time they have done some sailing locally. Chris used to sail dinghies and crewed in races in Qatar. He’s an RYA Coastal Skipper and occasionally rents a yacht and sails round to Dartmouth when the family visit. They both love Brixham for children and take their granddaughter Ruby Rose who is two, to the little bays along the Brixham coastline and along to Broadsands. Paignton Zoo is also quite a favourite.

Original story by Anita Newcombe in the June 2015 edition of the English Riviera magazine. Reproduced by kind permission of author/publisher.