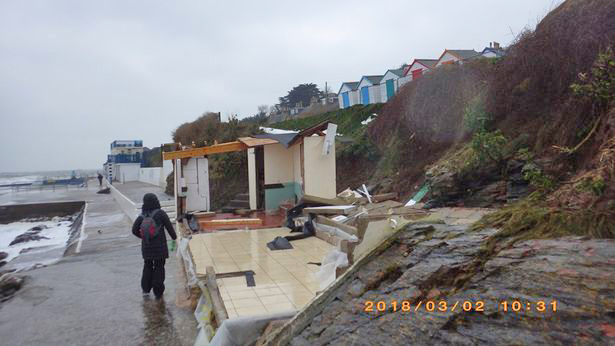 Storm-battered Brixham aims to bounce back after a weekend which saw huge waves pounding the port’s vulnerable waterfront. A crowdfunding web page has raised £5,000 in a single day towards repairs to the community-owned Shoalstone Pool.

As the combination of high winds, low pressure and spring tides brought havoc to Brixham, the Water’s Edge kiosk and cafe at Shoalstone was smashed to pieces; railings and huge chunks of concrete were torn up at Shoalstone Pool and waves smashed through the front of the nearby Breakwater Bistro.

The big clean-up is still under way, with business people and volunteers pledging to have facilities open again as soon as possible.

The kiosk at Shoalstone was smashed, and its contents washed out to sea. Debris from the kiosk and the badly damaged cafe next door was found on Breakwater Beach and as far away as Elberry Cove.

At Shoalstone Pool the waves damaged railings and tore giant chunks of cement out of the walls. A large ‘Welcome’ sign was also smashed but while the pool itself appears largely undamaged, it has been filled with debris from damage elsewhere, including glass from the cafe.

Sophie Walker-Haworth, who chairs the Shoalstone Pool Community Interest Company, set up a JustGiving page with the aim of raising £20,000. She said: “The combined forces of Storm Emma, the Beast from the East and very high spring tides conspired to wreak havoc on the Devon coast, including Brixham’s beloved Shoalstone Pool.

“This seawater lido has been at the heart of the community for over ninety years. It has weathered many storms, but rarely one with as much force as this. The sea battered the pool and its surrounds, tearing up concrete, ripping away railings, and destroying the doors to our storerooms – strewing maintenance supplies and equipment across Torbay.

The damage is particularly devastating as the pool is entirely run by and for the community, relying on a dedicated team of volunteers to keep it open in the face of vanishing local authority funding.”

Brixham Town Council chairman and pool volunteer Rosemary Clarke said it would be down to the volunteers to manage the whole process of repairing the pool but, she said, the aim was still to open for the Whitsun Bank Holiday.

She said the pool’s caretaker had been working flat-out on repairs and added: “The waves may have undermined the footpath above the kiosk, where some of the surface has come up.

“At the moment we can’t get any vehicles down there to carry out repairs.”

The Friends of Shoalstone will be raising funds with a coffee morning at the Community Hall in Fore Street on Saturday March 17 and a concert with the Riviera Ukulele Band at the Berry Head on Friday April 13.