Simon grasps the nettle and expands his business 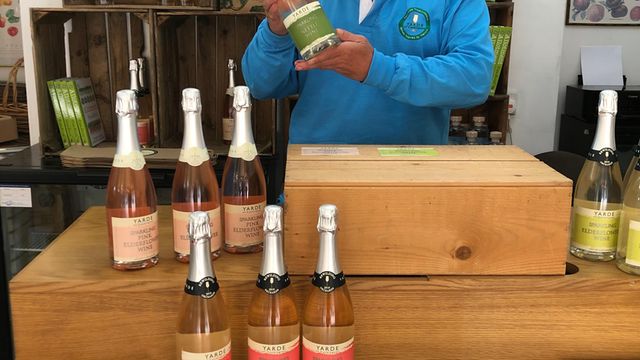 Brixham’s Simon Akeroyd makes wine from foraged plants and markets them under the Yarde brand. Since being featured on Channel Four’s ‘Devon and Cornwall’ programme, sales of Yarde of Cockington’s Sparkling Nettle Wine have soared. Yarde have now completely sold out of the bottles featured on TV and are looking to expand into another shop, this time in Dartmouth to sell their sparkling wild wines.

The programme, broadcast in July, followed Simon as he foraged for stinging nettles at Torre Abbey gardens in Torquay.  Ironically, the programme was narrated by John Nettles.

Simon said: “The original idea of the programme was that I was supposed to find an amazing, rare plant such as a palm, cactus or agave to make a quirky sparkling wine from. But when it came down to it, I decided the stinging nettles in Torre Abbey’s wildlife area, were going to give me the best flavour for the drink.”

Simon describes the sparkling nettle wine as being aromatic with fresh and zingy herbaceous flavours, as well as being dry and high in alcohol. Fortunately for Simon, there is an endless supply of stinging nettles in Devon, and they grow for most of the year.

Yarde of Cockington were originally known as Yarde Cider and would make Real Cider from a small unit in Stoke Gabriel using apples from the surrounding orchards. But since lockdown, Yarde have expanded into making sparkling wines from wild ingredients that are either foraged from local Devon orchards or grown in organic gardens.

Simon reckons there has been an enormous interest in customers seeking out unusual flavoured drinks. “I think during lockdown some people have perhaps become fatigued with the usual offerings of cider, beer, wine and gin, and have been looking for something a bit different to tempt their tastebuds with,” he says

Many of the main ingredients for the sparkling wild wines have been picked from Torre Abbey to make Yarde’s sparkling wines including rose petals, dandelions, pink elderflower and hibiscus.