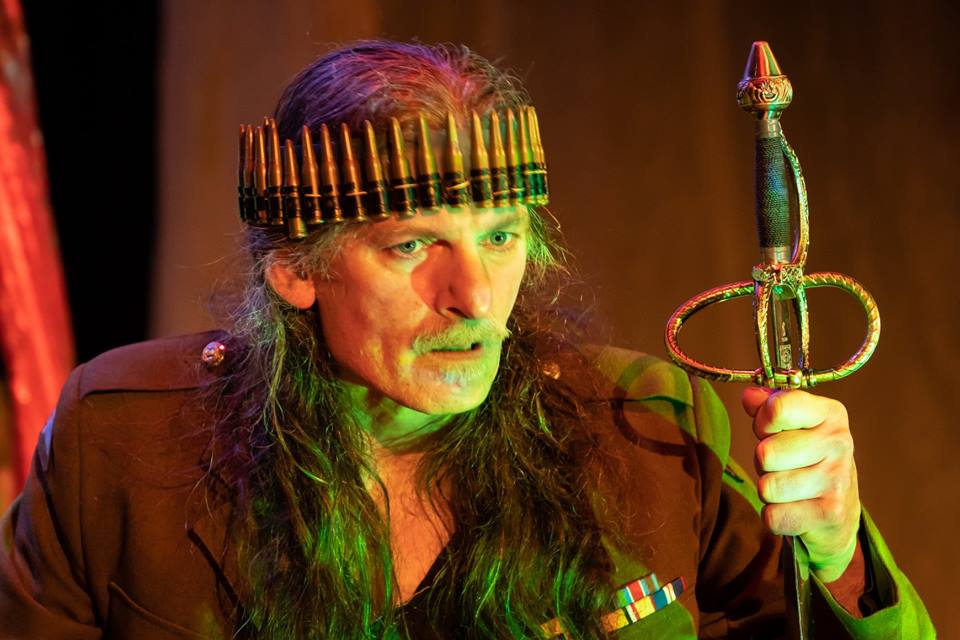 Following a hugely successful production of William Shakespeare’s Macbeth this winter, The South Devon Players have been nominated for a theatre award in New York’s Long Island Lighthouse Theatre Awards.

During January and February 2019, the South Devon Players performed a post-apocalyptic set production of William Shakespeare’s Macbeth. Completely unabridged and unchanged from the original text, other than being set in a post World War 3 near-future, this production attracted such audience feedback as

“The power of the final scene was such that the audience sat transfixed in silence, barely able to comprehend the beauty of what they’d just witnessed. “

The show was almost called off, after the lead role needed to be recast with less than 10 days before opening night. French/Irish actor Christophe Lombardi stepped in, learned the role in a matter of days and travelled to the UK to take the role, alongside Ryanna-Mae Lloyd as Lady Macbeth, with a powerful team of actors and techs.

Despite this crisis, the show attracted fantastic audience feedback, from the shows at both Brixham Theatre & Torquay Museum, swiftly followed by invitations for more shows in the UK, and abroad. While work continues to get the team out to the venues abroad, the team are taking up the show invitations in the UK, at Ivybridge’s Watermark theatre, and Exeter’s Barnfield Theatre and are also booking additional dates at the end of the summer and during the autumn of 2019.

The show was filmed at Brixham Theatre by a local filmmaker and submitted to the  2019 Long Island Community Theatre Awards. The Awards will be announced on June 10th in the evening, New York time.

The South Devon Players, founded in 2005/6 on the proceeds of a carboot sale, and funded in much the same way, are already winners of the national Epic Award 2017 for England, a national arts award celebrating creativity and innovation in grassroots arts, and international nominations for past productions. Based in Brixham, the Players pride themselves on supportive, friendly, and ambitious grassroots team of professional and aspiring professional actors at all stages of their careers, who primarily specialise in researched historical theatre productions and Classics, to provide an opportunity for local people to develop their skills in creating shows to a national standard, in order to develop internationally recognised professional skills, portfolios and credits.

They always welcome new performers and creatives who would like to get involved. The Players are working hard to be able to offer more education, steady employment, and more regular shows at an international standard.

Laura Jury (Director) studied performing arts at South Devon College, then a Bachelors degree in film & TV production from the University of Plymouth, before progressing to a Masters in teaching theatre from Exeter University With a history of performing since 1996, and directing since 2000, in between her training she has also pursued a career as a professional performer, and in 2006 founded the now multi award-winning South Devon Players Theatre & Film Company with three others, to create new projects in Torbay.