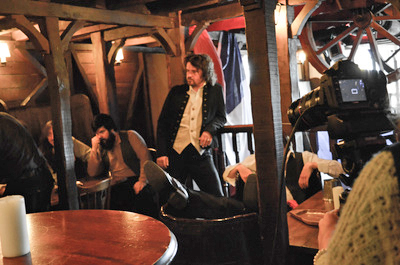 A Westcountry theatre group and film company will be heading up a film production panel at a movie and TV convention alongside stars from Game of Thrones, Doctor Who, Star Wars and Ghostbusters.

Chamber member, The South Devon Players Theatre and Film Company has been invited by the organisers of the Optimus film and TV convention to talk about their film production of Les Miserables.

They will be there alongside Ghostbuster actor Ernie Hudson, Star Wars star Jeremy Bulloch and George Georgiou who played Razdal mo Eraz in Game of Thrones.

The South Devon Players, founded as an amateur theatre company in 2005, in Brixham, on the £80 proceeds of a carboot sale.

They have steadily grown over the past ten years, specialising in increasingly large historical drama productions, winning awards, and being offered sponsorship for extra runs of productions by London-based producers,

In the past year the group has expanded to also become a film company and casting agency for experienced actors and is rapidly moving away from its amateur roots.

In March, after several months of casting, the Players began filming trailers and test scenes for their biggest project yet, a 20 hour film series based word for word on Victor Hugo’s original novel of Les Miserables, and featuring mainly local actors.

Shooting for the promotional trailer, which will be put forward for funding for the full series, will be completed in Brixham at the Skipper Inn, tomorrow (June 13).

Filming for the full series will take place in the autumn.