A treasure trove of maritime memorabilia 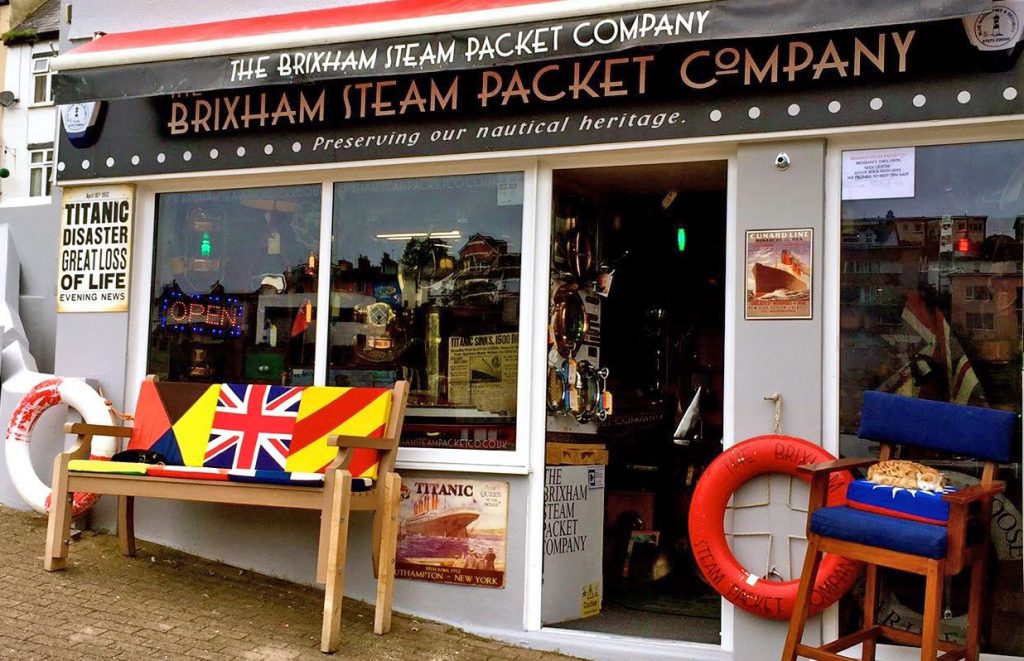 The Brixham Steam Packet Company is a fascinating shop in Brixham’s Middle Street which has a wonderful collection of intriguing antique and reproduction marine collectables. I’m meeting Bob Higginson for a chat in the open plan office space at the rear of the shop and am invited to perch on a tall stool that was once on the bridge of a ship. Chester, Bob’s Chesapeake Bay Retriever, who is clearly an important member of the crew, takes up position below me. 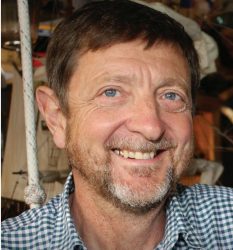 Bob clearly has the sea in his blood and in his heart so I’m interested to know how it all began. Bob tells me that he went to school in Bristol and struggled with dyslexia. Bob recalls, “It was called ‘daft’ in those days”. At the age of 15 he was given a choice by his father – either stay at school or join the navy. He had always fancied the idea of going to sea since he was a little boy and attended Plymouth Navy days so he wrote to Cunard to see if he could get a job working on the QE2. He received a one-line rejection letter but this didn’t deter him. He decided to sign up with the Merchant Navy – he was sent to Avonmouth and went on a training course which included 12 weeks on seamanship and a further 12 weeks on catering. Bob tells me, “It was the first time I had ever enjoyed a course.” Bobloved it and excelled at his course. He joined the navy pool at Avonmouth and was sent to Tilsbury where he was assigned to a BP petrol tanker called British Patrol.

Bob’s first weeks were spent as a galley boy, peeling potatoes as his ship visited Norway, Sweden, Denmark and Belgium travelling the North Sea and the Baltic Sea. The terrible snag for a boy who joined the navy to see the world was that the ship didn’t dock near cities or towns and due to a fast turnaround time the crew was not allowed to go ashore. So Bob suffered 3 months aboard with never a glimpse of the places he travelled to – the weather was awful and he was terribly seasick too. When he got back from from his 3 month stint, he called Avonmouth to say he didn’t want tankers, he wanted a passenger vessel so he could see the world. It must have been his lucky day because he got an immediate transfer to the QE2.

On the gracious QE2 he realised his dream of foreign travel, joining as a commis waiter (“a glorified bellboy” says Bob). Over time he was promoted to Assistant Steward, then Steward in the First Class Saloon then Demi Chef (cooking flambés at table), then Chef de Rang (one step below Head Waiter). Bob had been aboard for two and a half years and the ship was about to begin a Premier Cruise with some amazing destinations that Bobdesperately wanted  to visit.  Therefore he decided to apply for an effective demotion, transferring to Night Steward. This involved cleaning duties but meant he could work night shifts and have more time to go ashore. Another bonus was that the  night staff was housed in low-level passenger accommodation, which was much  better than the crew accommodation and easy to get some sleep.

Then  Bob made what he calls, “the biggest mistake of my life.” He decided  he wanted a change and joined  the family business. The family owned  an amusement arcade, a fast food restaurant, a small  hotel and a bingo club. Later they sold those and moved to Tamworth, building  a banqueting suite,  bingo club,  carvery restaurant and  nightclub. Here he worked for 20 years running the gaming side, which included repairing the fruit machines.

Bob was very tempted to return  to sea bur Cunard wouldn’t have him  back, having resigned from their company. Later he volunteered to return  to the QE2 when  it became a troop  carrier to the Falklands but he was also rejected. Then  the family sold their whole business and  built a nightclub in Spain near Mijas. He says, “It turned into a nightmare and  had to be abandoned after a year as it wasn’t commercially viable.”

Bob then met Jill who later became his wife and eventually set up Safeguard  Alarm Systems, which  he ran for 22 years. It obviously  became too much for him as in 2014,  Bob had a heart attack and was advised to slow down.  This experience led him to the much  more rewarding  business experience he enjoys today.  He had already invested  in property  in Brixham, where he had family connections, so he sold his alarm business and moved to Torbay buying the building in Middle Street where Brixham Steam Packet Company is now located.  The shop initially came with a tenant  plus a dwelling above which was a holiday let. However, the tenant  soon  left and the shop became empty. 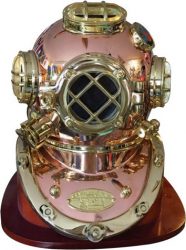 This was when  Bob had his epiphany and decided  to go back to what he loved- this was the opportunity to open an antique and reproduction marine collectables business.  It brought him  back into the world  of ocean going liners that  he had loved and lost. He opened Brixham Steam  Packet Company in February  2015  with a fun launch  party  that included a visit from famous pirate ‘Captain Jack Sparrow’.  Bob says, “I wanted  to evoke a nostalgia for this elegant and bygone age.”  Once the shop had opened, people started  to pop in and told Bob fascinating stories of their lives aboard cruise ships. One lady had worked  aboard  both  the Queen Elizabeth and  the Queen Mary and  had lots of stories to tell about Cunard.

Local customers and visitors starred  coming in and Bob has specifically targeted holiday  homeowners from Salcombe, Dartmouth Kingswear and Torbay  to sell marine  memorabilia to decorate their homes or holiday  lets.  He is also trading worldwide across the internet and  has customers across Europe and  the US. His son Charlie handles all the online  marketing. Charlie loves to travel and  speaks French,  which has been useful to the business. He’s a volunteer  crewman  on classic sailing boat Pilgrim and is at sea during my visit.

The shop’s stock comes in from ships that  have been scrapped from many different  parts of the world and  in many cases the provenance is well documented and makes a fascinating collectable. Often people  bring stock into the shop, like the ship’s bell from Brixham’s Jannie Marie trawler, which  the widow of the previous owner brought in. Bob bought the ship’s compass too and set it into a coffee table, which  he now uses in one of his own holiday lets.  Later he started making and converting things himself such as his clocks that are set into portholes. Bob makes the iroko hardwood surround, buys an original brass porthole and a ship’s clock (the one I’m looking at is a ‘slave’ clock which was controlled from the bridge of a supertanker), inserts a quartz  movement then  brings all the parts  together, sometimes using LED lighting too. Bob tells me, “The items evolve after feedback from our customers – every one is different.”

Other smaller clocks are very popular and  his customers also love passageway lights and ship’s bells. Another recent item he has worked  on include  a handrail off RMS Windsor Castle in wood and  brass.  He also has diving  helmets,  a 1929 ship’s telegraph  off USS Vixen, a life ring off SS Peerless (which was sunk by a German U-boat off the Cornish coast and washed up on a beach), stateroom lights off the SS Princess Daphne and much more.  Bob also has 10 life rings from the Harbour Defence Motor  Launch, which  became the Western  Lady (it had been to Dunkirk to help with the evacuation). Bob plans to paint the name in gold on each of these and they will only  be sold to people in Torbay.

Bob explains, “When ship’s are scrapped, they are run aground; the crew then abandon ship and shore staff take over and dismantle  the vessel. This is where I come in to salvage pieces of history.” Sometimes Bob becomes so attached the evocative and historic items so much that  he can’t bear to part with them. He explains, “My greatest pleasure is going our and finding  things at salvage yards and online – it’s a joy opening the parcels as they arrive.”

Bob also has genuine (and very beautiful) Terry Allen posters of the SS France in Art Deco Style at the moment. Other very popular items for QE2 collectors are the hundreds of menus and charts, many signed by the Captain and First Officers. The whole place is a real treasure trove for lovers of the sea and is worth spending time really browsing around.

Bob’s other interest, Blue Goose Marine is a holiday letting business and one of his properties at Moorings Reach has something off the QE2 in every room.

It’s clear that Bob loves his new world of maritime nostalgia and it’s a great inspiration to people who may want a career change, that it s never to late to start doing something you love!