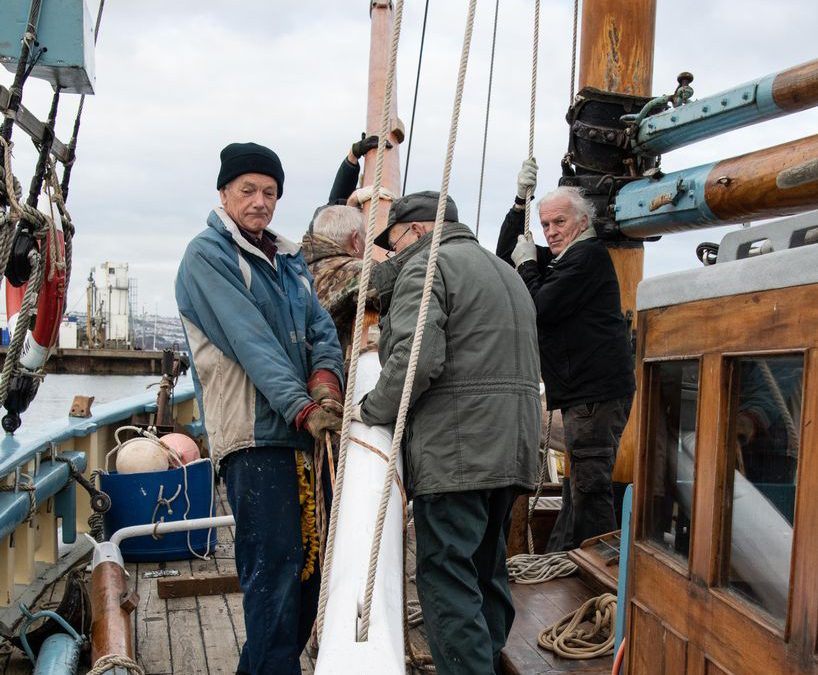 Following winter maintenance, chamber member Vigilance of Brixham is now ready to take locals and visitors on tours around the bay once again.

Volunteers working to raise the top mast of the Vigilance were warned: “If it falls it’ll pierce the deck like a harpoon – and it won’t stop until it crashes through the bottom of the boat!”

Vigilance – the last Brixham sailing trawler to have been built at the port’s famous Uphams Shipyard in 1926 – has been undergoing comprehensive maintenance work this winter.

One of the most complicated and dangerous jobs is to raise the 32-foot solid Douglas fir top mast which weighs more than half a ton. It was lowered in October to be checked over, and now it has been placed back on top of the 50-foot main mast.

A team of 10 skilled and experienced volunteers tackled the job. Richard Boyles and Peter Chrystie spent several hours at the top of the main mast while the others carefully raised the top mast from the deck. The whole operation – meticulously planned by Gerry Scutt and taking four and half hours – went without a hitch.

There will be on Open Day on Vigilance on April 9, when the boat will be on the Heritage Pontoon in Brixham Harbour. Passenger sails begin the following day.