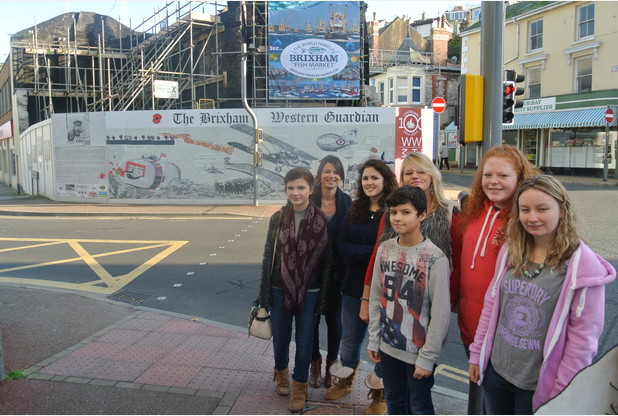 A large banner saying ‘Welcome to Brixham Harbour’ has been put up on the former Threshers site in the town.

The banner, organised by Gordon Gout of Brixham Chamber of Commerce, has been sponsored by Brixham fishing bodies and trawler owners. Donations from the Mayor of Torbay and the harbour authority helped to pay for additional scaffolding.

The aim of the project was to create a large-scale mural that would transform a very central public space and tell a story of Brixham’s involvement during WW1.

Sera Quistelli from Create Workshops, which organises community art projects, said Brixham Heritage Museum’s contribution towards achieving an informative and accurate account of events in Brixham between 1914 and 1918 was ‘invaluable’.

Gordon Gout from the Chamber of Commerce said: “Residents and traders agree, although not perfect, it has restored some sort of dignity to the community.”

The banner and murals will remain in place until a decision has been made on the future of the site, which is expected to be in March next year.

Brixham Youth Enquiry Service is hoping Torbay Council will approve its plans for flats and two kiosk shops, one incorporating a community hub and tourist information office, at the site at 2 and 2A Fore Street.