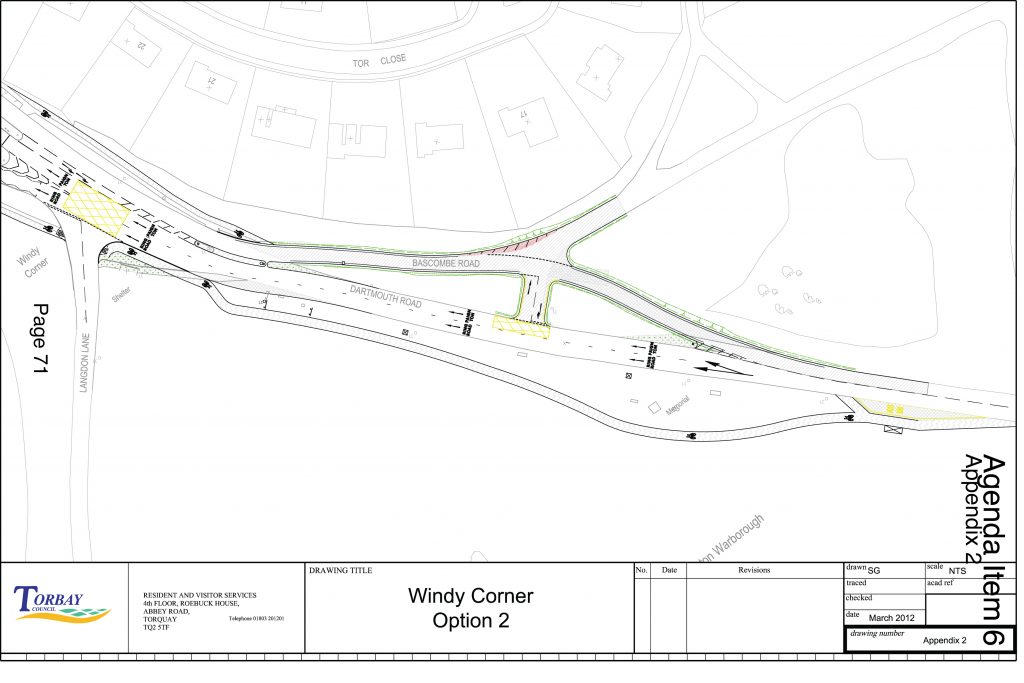 Improvements to the Windy Corner junction are to be carried out almost 10 years after they were first discussed.

Funding to the tune of between £200,000 and £300,000 is now available from the Western Corridor scheme, which includes a number of improvements between Windy Corner and Churscombe Cross. Torbay Council applied for the cash from the Local Transport Board.

The junction improvement scheme was agreed in 2012, but had been looked at as far back as 2006. Consultations have been ongoing and an original initiative received 200 objections, so planners had to look at the issue again.

Galmpton Residents Association suggested their own proposal for consideration and a further consultation was held in 2011 . The working party recommended option two, which involves widening the junction and creating two lanes at Windy Corner heading into Brixham. But the scheme never went ahead at the time because of a lack of cash. However, it was included in the Western Corridor bid, which was successful. Completion of the scheme is required by 2018.

Consultants had to look at the options again and results show the original widening scheme is the best option.

Council officers told members of the transport working party that the scheme proposed by Galmpton Residents Association would deliver similar benefits but would require land acquisition and service diversions and is unlikely to be deliverable.

Officers recommended that option two as approved in 2012 should be implemented.

Cllr Mike Morey said Brixham Community Partnership and the Chamber of Commerce did not recall any consultation taking place in Brixham. He said he understood the need to work to the 2018 deadline but was concerned residents did not have the chance to give their view and make suggestions.

Officers said thedead line was due to fixed-term funding and it was considered that option two would suit everyone. However, it is possible there could be objections to using land from Churston common, which could lead to a public inquiry being held.

Any further consultation, to be brought back to the working party’s next meeting in December, may prompt objections which would slow progress.

Cllr Jackie Stockman pointed out that highways chief Patrick Carney had attended a meeting of the Community Partnership and that 80 per cent of the 42 who attended had backed the option two version.

She also raised the issue of ongoing problems at Long Road, which has caused significant delays travelling between Brixham and Paignton. She asked how those issues were going to be alleviated and added that if a decision was made too quickly, something could be missed.

It was agreed to proceed with Option Two with the addition of hatched boxes on the junctions and crossings.

Options for future long-term strategy for the junction are to be developed for further consultation and inclusion in a subsequent funding bid.